While the genealogy blogosphere is ramping up the chatter about mega-events RootsTech and FGS 2015—this year’s conference of the Federation of Genealogical Societies—it’s a good thing I didn’t make plans to join the festivities. Yup, yours truly is under the weather.

Nothing serious. Just the kind of malaise that isn’t bad enough to knock me out, but not good enough to keep up my usual activity level. Not sleepy. But tired.

What to do with such a dilemma? Well, that question is easy to answer for a genealogy fanatic: do online research. I’ve been amassing data from reference books which provide family trees to several lines related to my Taliaferro ancestors, diligently copying down the trees I’ve been finding.

Somehow, when housed in a recognized genealogical publication from a past century, a book’s trees take on an aura of infallibility. I was well into the process of making notes on these established records when it struck me: what’s the difference between copying notes from a hundred-year-old genealogy book and copying notes from an online tree?

Remember those periodic diatribes about how amateurish it is to copy from others’ trees posted online? I first ran into those debates years ago, when searching for any mention of my ancestors on Rootsweb. The harangue had been resurrected for the advent of Ancestry.com—and will likely suffer re-runs with each iteration of a “next gen” genealogy product. There is a large body of people incensed at the ability of online researchers to see others' research—worse, to actually use it as trailblazer material to lead them in the right direction.

Bottom line: it is e-vul to do so. Not just evil. Evul. Ask anyone in my daughter’s generation. There is a special place like no other reserved for “evul.”

Don’t think this is the time to step up on the soap box of how utterly amateurish this current batch of come-one, come-all researchers is. For all I know, you could be saying that about me. Come to think of it, if I get caught up in that argumentative frenzy, I could be saying that about you. And we’d all get so wrapped up in the rhetoric of the thing, we’d lose sight of the inanity of the argument.

The point is: just as much as we need to exercise the utmost care in examining first before lifting any details from another researcher’s tree available online now, we should be employing the same diligence, even when examining the revered publications of past centuries. Anyone can make mistakes. Actually, since we are so uniquely gifted with research tools that previous generations couldn’t even begin to dream of having, I’d say it is more likely that some of those older genealogies harbor mistakes.

So, true confessions: I’ve been spending the last week, taking the Taliaferro trees and putting them in database format, just so I could get a handle by which to grab and examine the details. I didn’t question anything I found—just kept copying. After completing one book’s details, I went to the appropriate sections in other books which included my lines, and cross-checked those details against what I had already entered in my database.

And now comes the big challenge: going back to all those ancestors, all their siblings, and all their descendants, to see if I can locate documentation online to support those published assertions. And why not? If that is what is expected of all those amateurs romping through the wide open fields of Ancestry.com or the new trees at FamilySearch.org, then we need to hold these old genealogy formats to the same standard. After all, they may perpetuate some errors of their own. Just because they are permanently recorded in ink doesn’t make them less wrong. An error is an error—whether virtual or not—and the best way to prove a line is to document it.

Today, when I just didn’t feel up to getting on my feet and doing much of anything, with iPad in hand, I played the couch potato and flipped through the generations, seeing what documentation could be linked with each Taliaferro entry. In a way, it’s tedious work. There are so many names already entered. But in another way, I realize that, as researchers, we are totally spoiled with all the Internet access to digitized records that we have. Just think of the time and expense that would otherwise have been called for in rounding up all those documents in an earlier era of genealogical research.

Though being sick isn’t fun—not even the "little bit" sick I’ve been—this actually provided me the excuse to just sit down and do it: plug away at finding the evidence to confirm that these genealogical lines are documented correctly. Though I’m missing the excitement of the conference rush at the premier genealogical destination in this country, that’s okay. Sometimes, you just have to be grateful for the way timing and opportunities align, even if it isn’t the dream ticket of the day. 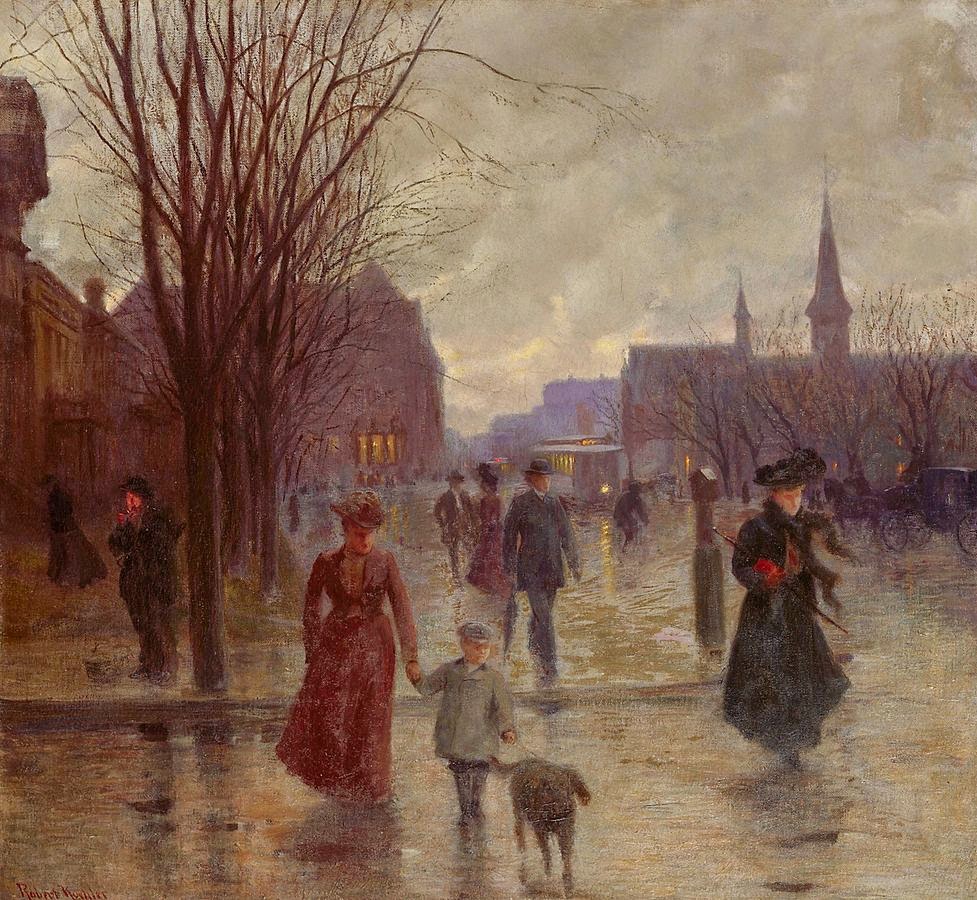 Above: "Rainy Evening on Hennepin Avenue," oil on canvas circa 1902 by Robert Koehler; courtesy Wikipedia; in the public domain.
© Copyright 2011 – 2022 by Jacqi Stevens at 2:41:00 AM
Email ThisBlogThis!Share to TwitterShare to FacebookShare to Pinterest
Labels: Documentation, Taliaferro