Got Any Presidents in Your Roots?

Now that you’ve dabbled in your family history—at least enough to see where the trail meanders, back through time—have you stumbled upon any unexpected realizations? Have you been surprised to find you are related to anyone famous? Discovered any celebrities? Or, at least, nefarious characters?

Since we are wrapping up the official Presidents Day weekend, who has any presidential relatives to share?

If you don’t have any fascinating genealogical connections, don’t despair. Neither do I. Although I’ve come close. Remember my first husband, that tall guy with Marfan Syndrome? He used to joke about how his maternal grandmother later married a man named Lincoln—and about how likely it was that he was related to the Lincoln family.

It didn’t take me long to fire back, “Yeah, and I’m related to the Booth family!”

And I may well be, though I haven’t found the smoking gun. Yet.

While working on my maternal McClellan line, many years ago, I connected with a distant cousin’s in-law who claimed relation to President Ulysses S. Grant. I thought it ironic that his connection was through one of my southern lines. Oh, how I wanted to retort, “And I’m related to Lee.”

About the closest I can come to a famous connection has been through my mother-in-law’s line. Someone way up-line had married into a family which then had a relationship that connected, eventually, with astronaut—and later, senator—John Glenn. If that circuitous genealogical route makes you dizzy, don’t be surprised. Sometimes when that genealogical “what if” game gets played, someone will always want to shoot for the moon. That’s when we need to come back down to earth with a serious look at the paper trail.

Now that I’ve been exploring another line in my mother’s heritage, I recently discovered that an in-law (several generations back, of course) was the daughter of an almost-President. Politics being politics, then-Vice President John C. Calhoun found himself on the losing side of some debates which cinched his political fate.

So, I guess I can’t really claim any brush with fame or fortune. But that’s okay. I constantly find it helpful to remind myself that I’m tasked with being a biographer of insignificant lives. And look how many stories there have been to find. With anonymity like that, who else would have been there to tell their stories?

If you are like me—no famous relatives or even rich uncles to brag about—then take heart that with each genealogical discovery you make and tell, you are passing along a story that is worth sharing. Though the names of your ancestors may not be up in lights on the theater marquee, nor the tale included in The New York Times bestseller list, someone from your line of descendants will one day be glad you took the time to tell the story. 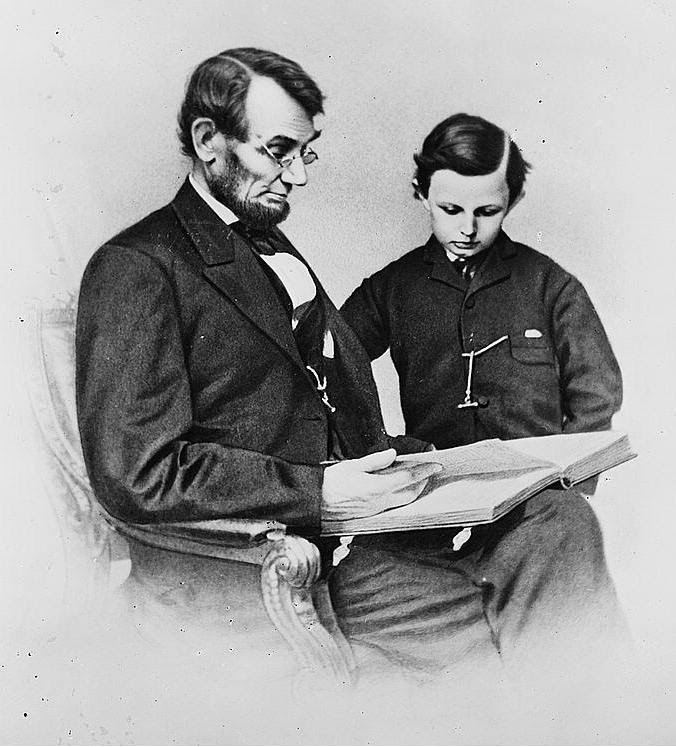 Above: Photograph of United States President Abraham Lincoln and his son Tad, taken in 1864 by American photographer Anthony Berger; courtesy United States Library of Congress Prints and Photographs division via Wikipedia; in the public domain.
© Copyright 2011 – 2022 by Jacqi Stevens at 2:52:00 AM
Email ThisBlogThis!Share to TwitterShare to FacebookShare to Pinterest
Labels: Holidays and Genealogy