A Sense of Place

With temperatures here in northern California sneaking up into the seventies, the urge to be outside catching some sun is overwhelming. Along with that change of venue comes the predictable: a great desire to get some blooms into those flower pots on my front porch.

What we do with the space that surrounds us tells almost as much about us as our conversations with friends or our habits around family. What do we do with the “margins” surrounding our lives? Do we fill them up to over-brimming? Leave the space stark, devoid of any clues? Or strike a workable balance?

Sometimes, those telltale margins shift through our ages and stages. When I was a crazy college kid, writing letters back home (yes, back when we only had wood-burning telephones—and let me tell you, they were expensive!), I filled up every square inch of paper. I was known as “The Empty Space Fiend.”

Now that you know that, it will probably come as no surprise to you to learn that the first time I laid eyes on the stark décor featured in a Pottery Barn catalog, my immediate thought was, “And people live in these places?!” (In their defense, to the original sterile palette, they have since added books, cushions, and other comfy signs of life.)

Of course, what I did with my margins during those stages of life was heavily influenced by the necessities of my economic standing. By the time, long after graduation, that I finally emerged from Starving Student status, I had entered the realm of two-jobs-plus-overtime. Oh, and I started my first business. There was no margin.

Lately, the phrase, “sense of place” has been reverberating in my mind. I first was impressed with this concept when reading Melissa Mannon’s blog, ArchivesInfo. Two years ago, she posted some brief comments prompted by the same thoughts I mentioned above. For Melissa, being “connected to a space” was an important orienting factor: “It is when I un-tether from [my] surroundings that I feel out of sorts.” Artwork on her walls and flowers outside her picture windows were important aspects anchoring her with a sense of place.

While making a place for yourself may seem to be the realm of the artist or the interior decorator, we each have a way of handling the space around us. It’s our way of claiming a toe-hold on what surrounds us—our environment.

Whether you’ve given that concept some thought or not, I want to encourage you to not only think of yourself here, but to consider what you might glean about your ancestors by the telltale signs they left behind: the pictures they chose to hang on their walls, the books they chose to surround themselves with.

Actually, the very places they chose to call home can tell us much about them—not only their personality but their circumstances as well. The space they claimed from the area surrounding them—and what they subsequently did with that space—reveals something about their personality, their view of their life situation, their economic and social standing and, perhaps, even more.

I think of my Polish-American ancestors, likely thrust, upon arrival in the New World, into the squalor that was the nineteenth century Brooklyn of the teeming immigrant masses. What made them seek to escape to the better neighborhoods of Queens borough to the north? What about my husband’s immigrant Catholic forebears, settling originally near the coastlands of Maryland—what led them to choose the relative risks of the wilderness of Ohio at the dawn of the 1800s? And what Sense of Place were my Southern relatives seeking, as they moved, generation by generation, farther south and then farther west?

All these people were surrounding themselves with what they hoped would make life better for them: more farmland, a bigger house, a quieter community—or a busier city.

While life in past ages may have seemed (to us, at least) simpler, people have always filled their lives with stuff. I can’t help but think of the Bean family, making the long and risky journey “around the Horn” from Maine to San Francisco—and hauling their beautiful furniture with them. Even the ones who left it all behind soon found ways to replace what they couldn’t take with them. Why? Their “Sense of Place” radar demanded it of them. We all need a way to make our space feel like home.

Some of us are fortunate enough to be the proud possessors of those items that once gave our ancestors that Sense of Place. While it might not have been a silver service, it would still have served the same purpose. Whether a framed needlepoint creation or a quilt for the bed, each piece fulfilled that important function of claiming and taming a small portion of the environment to call one's own. It is in how that turf was claimed that the tokens reveal something to us of our ancestors’ preferences and, ultimately, of their personality. 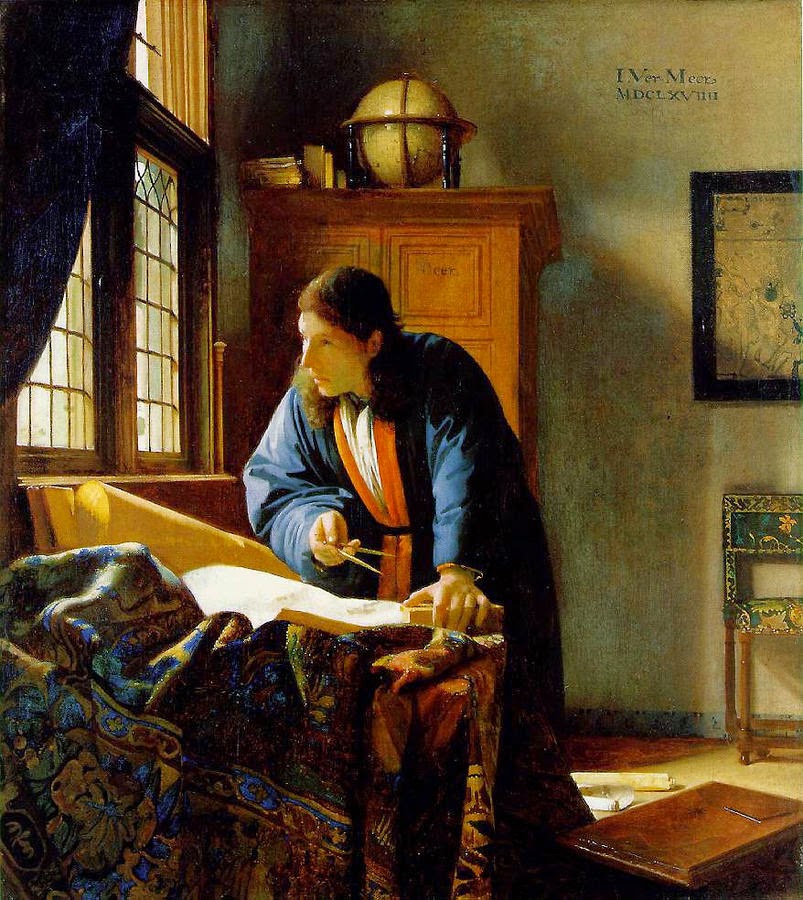 Above: Johannes Vermeer, "The Geographer," 1669 oil on canvas; courtesy Wikipedia; in the public domain.
© Copyright 2011 – 2022 by Jacqi Stevens at 2:46:00 AM
Email ThisBlogThis!Share to TwitterShare to FacebookShare to Pinterest
Labels: Getting the Big Picture, Keepsakes