When the Same Surnames Keep Showing up

Until the puzzle pieces keep repeating themselves, we sometimes don't even realize we've just received a research clue.

When I found the wedding photo of Lynn Ottum and Robert Wulf among the collection of pictures I retrieved from a local antique store, I presumed the former owner, Marilyn Sowle Bean, had kept the memento because they were her relatives. Last week, I researched both names and, surprised that I couldn't find any connection to my mother-in-law's family, decided to post the photograph here anyhow, in hopes that someone in their own family might find the post and request to receive the picture.

With that, I dismissed from my mind the possibility of discovering a new family line for Marilyn...until I ran across a second photo bearing the same surname. When surnames like that—especially a name I had never heard before—keep popping up, I wonder whether I've missed a connection.

To tell the truth, when I didn't succeed in determining a family connection last week, I actually thought maybe I had been overzealous in my purchases at the antique store. Maybe this was someone else's family photo. However, the photo I found this week—still from Marilyn's collection retrieved from the antique shop—definitely had a connection to Marilyn's family.

There is no doubt that this photo is tied to Marilyn Bean. Even if she hadn't affixed her meticulous labels on the reverse, I could tell the young boy in the photo was her own son. Granted, it was hard to determine his age but remembering how he always looked so much older than he actually was, because of his height, I would have guessed he was about five years of age. I wondered, however, why the little girl sitting with him wasn't instead paired with Marilyn's daughter—until I realized she would have been a toddler at that point, if her brother was just five.

For privacy reasons, I'll just say that the young girl, whose name was listed on the reverse, also had the same surname as that of the bride in last Saturday's photograph. My first guess was that the bride from last week's photo must have had a brother, and that this little girl would have been his daughter.

However, having now encountered two people with the same surname helps focus the research effort more accurately. That research effect thus revealed the bride's approximate date of birth, leading me to discover her place in the 1940 census—back in La Crosse, Wisconsin.

Apparently, just as had Marilyn's parents, after the 1930 census, bride Lynn Ottum's parents, Marjorie Schulze and Alvin Lawrence Ottum, moved their family from Wisconsin to southern California after the 1940 census. Though there was only one child listed for that census, Alvin's obituary, printed in the newspaper back home following his 1986 death in southern California, indicated that among the surviving family members were two daughters, as well as one son. Although his children were unnamed in the article, this leaves us with the possibility that the younger daughter might actually be the one named in the photograph.

Regardless of the actual identity of the young girl in the photograph, the picture is now one which I want to return to a family member. Not only that: whether Friends, Associates, or Neighbors, this F.A.N. Club clue reminds me that seeing the same surname twice—or more—in the same collection of the family's "stuff" is my prompt to keep searching for the connection.

This is no longer the case of a memorable wedding ceremony—or even of a cute little girl posing in a photo with one's son. Marilyn kept these photos her entire lifetime for a reason. It's now my task to discover what that reason might have been. 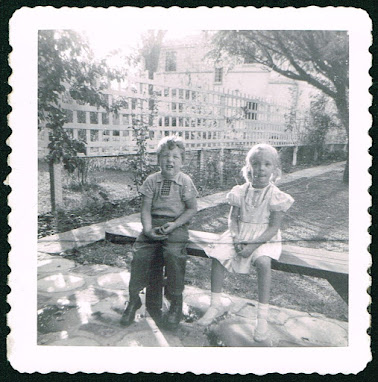 © Copyright 2011 – 2022 by Jacqi Stevens at 2:53:00 AM
Email ThisBlogThis!Share to TwitterShare to FacebookShare to Pinterest
Labels: Bean, California, Friends of the Family, Sowle, Wisconsin