Postscript on the Irish

Some research projects are hard to let go. Count my failed search for my father-in-law's Kelly ancestors in Indiana among them. Yet let me add just one more word before we move on to August's research challenge.

There was so much to glean from William Giffin's book, The Irish, that I couldn't say it all in one post. Nor does this one tidbit I found necessarily connect to the immigrant Kelly family upon their arrival in the vicinity of Lafayette, Indiana. It does, however, provide a glimpse of circumstances which might have influenced the choices made by their future in-law, John Stevens.

I already had learned about John, who eventually married Catherine Kelly, that he had filed his Declaration of Intention in Tippecanoe County, which document serendipitously gave me the exact details of his immigration route.

The Declaration provided his stated age—twenty seven at the time, though who knows whether that was framed in the Irish tendency to minimize such numbers during those vital working years. The record also told me that he was born in County Mayo, and that his route to America was through Liverpool in England, eventually arriving in the city of New Orleans in Louisiana.

What I failed to pay attention to—and had to go back and check today—was the date in which the Declaration was completed in Lafayette. Here's why.

William Giffin's book on the Irish in Indiana went into detail on several aspects of immigrant life during various time periods throughout the state's history. Noting the evolution of acceptance of Irish common laborers in the state, Giffin noted that the Irish were active in state politics long before 1860. Almost unanimously, Irish immigrants supported the Democrat Party, and for good reason: the party's line was sympathetic to the cause of immigrants. In fact, because of that Democrat control of the 1850 state constitutional convention, delegates voted to "ease voting requirements for immigrants."

Giffin noted that the catch was that "aliens could vote providing that they declared their intentions to become citizens and met a minimal residence requirement."

Apparently, there was a rush among those Irish immigrants to file their first papers of the naturalization process. Giffin cited a study of one Indiana city in which many such Irish declared their intentions in the week leading up to the general election itself.

That made me curious. As it turns out, I have a copy of John Stevens' Declaration of Intention, so I took a look to see. Sure enough, apparently as soon as he could, the Irish immigrant from County Mayo fulfilled the requirement on August 4, 1851.

I don't have any way to know whether taking that act indicates anything on John Stevens' part, but I like to think he was certainly attuned to current events in his new hometown of Lafayette, Indiana, and possibly even keen on the twists and turns of local politics. 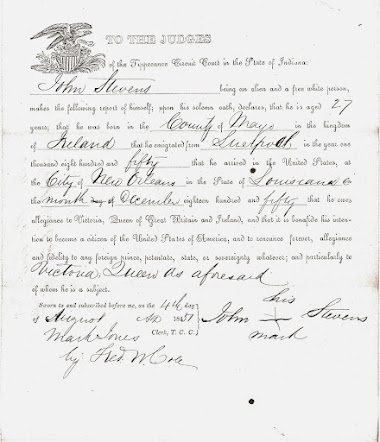 Above: Copy of the Declaration of Intention of John Stevens of County Mayo, having arrived in Tippecanoe County, Indiana, via New Orleans in December, 1850; copy on file in author's records.

© Copyright 2011 – 2022 by Jacqi Stevens at 2:55:00 AM
Email ThisBlogThis!Share to TwitterShare to FacebookShare to Pinterest
Labels: Books, Immigration, Kelly, Lafayette IN, Naturalization Records, Stevens