It was October 15, 1956, and Marilyn Sowle Bean wanted to hold a birthday party for her two year old daughter, Judith Louise. The only problem was, she would have to throw that party by herself. By October of 1956, Marilyn had been a single parent for almost a year, following the loss of her husband Earle the previous December.

As if that weren't devastating enough for the young mother, her husband's death had followed only eleven days after that of his older brother Sam. The original pain was primed, however, with the death of her own beloved father only seven months before that.

Apparently, though, there were friends—friends I hadn't known about, even though I did realize that time period was so difficult for Marilyn. The only way I've found out now is thanks to the discovery of her photograph collection, which had—unbeknownst to me—been sold to a local antique store, and subsequently spotted by a young genealogy enthusiast who (thankfully!) alerted me through the message boards at Ancestry.com.

The photo which told the story was thoroughly noted in Marilyn's hand on the reverse. Labeled at the top was the legend which I could easily have surmised, based on the picture, itself—but which someone else might not have known. Labels on photographs help us pass family stories along from previous generations. 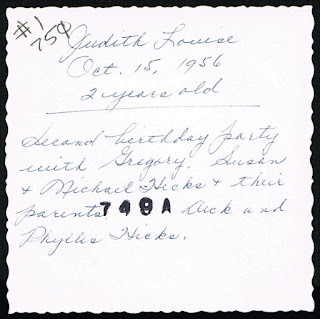 So who were Dick and Phyllis Hicks? Names I've never heard Marilyn mention—that I recall—they and their children Michael and Susan might have been friends because of Judy's older brother, Greg. Maybe they were friends from the old neighborhood in San Lorenzo in northern California, where Marilyn and Earle had settled to raise their family. Or perhaps these were new-found friends from Marilyn's move, as a widow, to be close to her own mom's new home farther north in Santa Rosa.

Whoever they were, now that I can look back at the timeline of Marilyn's life, I can see those friends likely were a godsend for her in a very dark time, when she was desperately trying to raise her family with as much encouragement and cheer as a now-fatherless and widowed only child could do at this rocky start to her adulthood.

I'd love it, of course, if I could send this photo home with someone from the Hicks family, but given the time frame, it is difficult to locate a possible family member. Trusting in the search engines to lead someone to this post may be the only option for now. 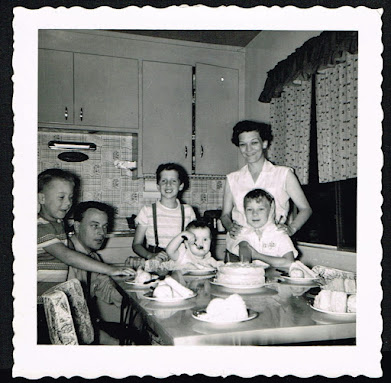 Photo above, dated October 15, 1956, taken by Marilyn Sowle Bean. Two year old Judy is seated at the head of the table, facing a birthday cake with two candles inserted, preparing with a spoon already in her mouth. Her brother Gregory is standing behind her. Michael Hicks is standing next to his father Dick, and Susan Hicks in front of her mother Phyllis. Picture currently in possession of author until claimed by a direct descendant—with my thanks for helping a family share some brighter moments in an otherwise tragic season in their lives.

© Copyright 2011 – 2022 by Jacqi Stevens at 2:49:00 AM
Email ThisBlogThis!Share to TwitterShare to FacebookShare to Pinterest
Labels: Bean, Family Photos, Friends of the Family, Sowle