A Brush with History

You never know what to expect when going through someone else's discarded photo collection. For family history researchers, the hope is always that a picture found will lead to a new family connection. That was certainly what was at the back of my mind when I followed a tip to retrieve my mother-in-law's many mementos at a local antique store, and it certainly has been the case for the items I've been able to research in the last few months. But not quite the same story for today's discovery.

Not all the photos in Marilyn Sowle Bean's holdings were pictures of family members. That is not surprising, even though as an only child of a divorced couple, she seemed to have lived a life as a loner, from what I knew of her later years.

Among the expected pictures of the children of her mother's many siblings left behind in Wisconsin were some I had yet to connect to the family. Though it was both her custom and that of her mother to carefully label each photograph, there were some which were identified in a handwriting not familiar to me. One in particular—a wedding photo—included an entire history of one bride's special day. 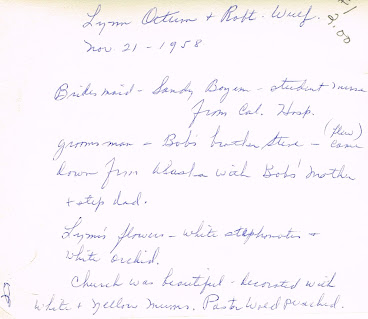 Of course, all that information included on the reverse of the photograph just cried out for someone to confirm the details. After all, my usual thought is that someone might want to have this picture—and I'd always be glad to send it to a family member.

I quickly realized that whoever wrote the description on the reverse of the photograph must have been connected to the groom's side of the bridal party, especially when I realized the bride's name was actually Lynn Ottum, not Octum. A lovely write up followed the 1958 wedding in the North Hollywood, California, Valley Times on December 18.

"Lynn Marjorie Ottum Becomes Mrs. R. W. Wulf," the headline declared, revealing the type of details genealogists like to glean, including the names hidden behind those irritating initials. "R. W." signified Robert William. Flying down from Alaska with his brother Steven—serving possibly as the pilot?—was his mother, the former Alice Elizabeth Ocker who, after the death of her sons' father Claus Howard Wulf, married Wilbert Wilson.

Unfortunately, the 1958 wedding eventually became the 1969 divorce. Curious to see what became of the couple afterwards, I was surprised to discover Robert Wulf's Find A Grave memorial not much longer after that, at barely thirty five years of age. There had to be a story behind the stark stone marker breaking the news to me.

Searching online for any further information led to several lengthy news articles, but each of them was headlined with someone else's name; mention of Robert's name was buried in one of the last paragraphs. Apparently, along with three other people, he died in a plane crash in a remote area outside Aspen, Colorado, where he had been working as a ski instructor. At first, it was unclear whether he might actually have been the pilot, but investigations of the crash indicated another man—possibly a novice pilot—was at the controls while Robert occupied the secondary control seat for the flight.

Seated in the back of the ill-fated craft were a man and a woman. It was this man whose death on July 24, 1972, triggered the news wires to pick up the story. Adult son of a woman who for her seven failed marriages was once dubbed the "poor little rich girl," he was "daredevil race driver" and eventual entrepreneur Lance Reventlow, scouting the area for a potential site for a ski resort he planned to build in Aspen.

While most reports carrying the news of the crash focused on Reventlow, there were some local articles written specific to this other passenger, Robert Wulf. Centered around his mother, they revealed that she had moved from Alaska to northern California, where she served as secretary for a local doctor in Auburn.

Though there were news reports of Robert's passing, none I found included any mention of possible descendants. As for the woman who had been his wife—Lynn Ottum—she since was married again and eventually disappeared from any detectable public mention, quite possibly rendering each member of this once-couple the last leaf on their respective family branches. 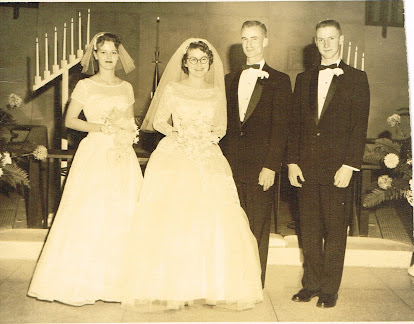 Excerpt from newspaper article above from page 22 of the North Hollywood Valley Times, 18 December 1858, courtesy of Newspapers.com.

© Copyright 2011 – 2022 by Jacqi Stevens at 2:54:00 AM
Email ThisBlogThis!Share to TwitterShare to FacebookShare to Pinterest
Labels: Friends of the Family