Off the Shelf:
The Irish

In a move of absolute research desperation earlier this month—trying to answer the question, "Why the Irish in Indiana?"—I found and bought a book published by the Indiana Historical Society Press. History professor William Giffin took on that same question in one of the volumes in the "Peopling Indiana" series, which he entitled The Irish.

In his introduction to the slim volume, William Giffin observed that earlier books on the history of the Irish in America tended to focus on arrivals in the northeast and to America's largest cities. While some later works did address specific other destinations, Giffin's study is a welcome addition.

Since my motivation in purchasing the book was in seeking to answer my question—specifically concerning my father-in-law's Kelly ancestors arriving in Lafayette on the western side of the state—I found it gratifying to see Giffin's inclusion of several passages specifically addressing that city and surrounding county of Tippecanoe.

Among the confirming passages were notes on the role of the Catholic Church for Irish immigrants, including specific quotes from reports on the first Catholic parish in Lafayette. You can be sure I've taken note of those passages, as well as gleaning the footnotes for further sources of information.

Yet the book was not specifically about my Irish arrivals in Lafayette in the mid-1800s. The book covers the entirety of the state, and is divided by time periods, as each span of time seemed to have its own specific qualifiers.

The first section on "Colonists and Settlers" spanned the time period between 1740 and 1832. While I'm fairly certain our Kelly ancestors did not arrive as early as that era, the chapter did set the stage for understanding the French influence in Indiana and the initial impetus for the Catholic church's arrival in the region.

The second section was where I believe our Kelly family was firmly pinpointed. Headlined "Newcomers in an Age of Mass Immigration," the chapter dealt with the time span between 1832 and 1860. The Kelly family certainly arrived within this timeframe. The chapter covered the many canal schemes and calls for laborers—as well as adequately painting the picture of living conditions for the Irish (and others) who heeded the call to work on such projects. While such descriptions add much on the "soft" side to a researcher's empathy for the human condition, such understanding is essential for those of us seeking to break out beyond the bounds of "genealogy-only" and into the more contextual details of family history.

Beyond this chapter—where I primarily camped—the book continues with a review of more recent time periods. One chapter moves beyond 1860 to the post-World War I era, classifying it as "Urban Community Building." A following chapter takes up the natural progression from Irish immigrants to descendants of immigrants, and the resurgence of an "Irish Identity," bringing the book's narrative up to the year 2000 at its close.

Complete with numerous photographs, several charts, and an extended bibliography in one slim volume, The Irish provides me with ample direction for a next step in my Kelly research—as well as painting a picture of the likely circumstances those Kelly family members may have experienced upon their arrival in their new home. 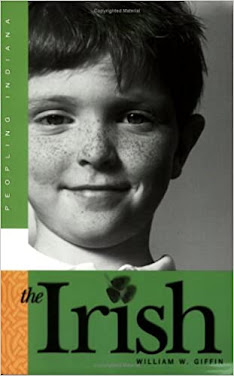