The Proliferation of Orphan Photos

The school tradition, in the past half century or so, of printing sheets of wallet-sized photos of elementary grade students will likely proliferate into an extreme case of unidentified—or orphan—photos in many of our inherited family picture collections.

Just think of it: little Janey comes home with an envelope stuffed with pages of miniatures for proud parents to snip and send far and wide. If grandma, grandpa, and all the doting aunts in the family carefully tuck away those miniature portraits for fifty years, who is next in line to inherit the multiplied echoes in each unidentified collection?

Fortunately, the sole remaining school photo in Marilyn Sowle Bean's forsaken collection did have a label—enough of a clue to help me discover just who claimed that earnest gaze and Mona Lisa half-smile. Above the recognizable handwriting of Marilyn herself was a child's signature, telling me instantly that whoever this was, she struggled with dyslexia.

"Carolyn Cublert" was the child's signature at the top of the photo's reverse, followed immediately by an adultlike correction, "Culbert." 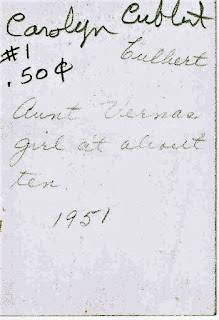 Marilyn's due diligence with such labeling duties provides us the guidance to understand why the girl's photo was in her collection. "Aunt Verna's girl at about ten," Marilyn wrote, followed by the date, 1951. Verna was sister to Marilyn's mother, Olive Brague Sowle. Since Olive was the oldest of Oliver and Ragna Brague's nine children, she was seven years older than the couple's fifth child, Verna.

In what might have been seen, among high school sweethearts, as a couple made for each other led to the marriage of seventeen year old Verna to her beau from La Crosse, Wisconsin, named Vern. Vern and Verna were married in 1933—though not at home in La Crosse. Theirs was a marriage in Houston County, Minnesota—not only over the county line from La Crosse, but also across the state line.

Carolyn was the third child of Vern and Verna—and the last. By the time Carolyn was seven, her mother had married widower Arthur Hjelsand, who eventually, at least by some reports, adopted her three children as his own, adding yet another surname for Carolyn to struggle with.

I can't determine when, but at some point after that, Verna and Arthur moved their combined family to the Philadelphia area, where Carolyn's own 1963 marriage license application was published in the Philadelphia Inquirer under her adopted surname. For years after that, she and her husband resided in a New Jersey town, where they raised their only son, but by 1984, she had succumbed to cancer at the age of forty three.

Now knowing her story, I can see why that earnest gaze from the ten year old's photo strikes me as wistful—not only from her unfortunate end, but from the possibility that there may be no one to find who would treasure having that ten year old's photo once again. But for an unexpected disease, Carolyn would likely still be there in her community in New Jersey, perhaps passing her own photo collection on to her grandchildren, instead of being remembered only through a thumbnail sketch from her cousin's lost treasures rescued from a local antique store. 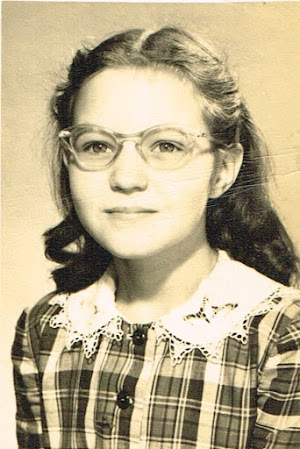 Above: Photo, along with its inscription on the reverse, of ten year old Carolyn Nancy Culbert, also known as Carolyn Hjelsand, as a student in La Crosse, Wisconsin, in 1951.