What brought our immigrant ancestors to America? Many people who consider that question assume their families made the journey merely in hopes of finding a fresh start in a better place. While that may have been true, it wasn't a notion which simply occurred to people without any added prompting. There were others out there, making the reverse journey in hopes of attracting settlers to their specific prospects. Whether for employment, purchase of land, or other reasons, you can be sure there were people out there, promoting their project to anyone willing to take the risk to settle in America.

In trying to determine just what brought my father-in-law's Kelly family to Indiana, it hasn't been lost on me that there were at least two possible beacons blaring the way to Indiana for Irish immigrants. One was the availability of fertile agricultural land near newly-opened shipping routes. The other was the opportunity for gainful employment through either the canal projects in the earlier years of the nineteenth century, or the railroad projects of the latter part of that century.

We've already noticed the agricultural opportunities in western Indiana advocated by Connecticut businessman Henry Leavitt Ellsworth, but what I hadn't yet mentioned is Ellsworth's efforts to advertise 200-acre parcels of the land he was selling. How far and wide that promotional effort stretched, I can't say, but it provides only one of several such advertising efforts bringing people to the midwest.

While the call of agricultural opportunity might have seemed the most reasonable for mid-century Irish immigrants, who in their homeland were primarily experienced with farming rather than trades, this might not have been the most-heeded call for the Irish to settle in western Indiana. More likely—depending on the time frame—would have been the help wanted ads for laborers to build the canals or railroads crisscrossing the area.

The Wabash and Erie Canal, for instance, was the impetus for growth in many cities along its towpath, Lafayette being one of them. The canal reached Lafayette by 1843, but many Irish laborers were already working on the state's canal system much earlier. By 1837, there were already a thousand laborers working on Indiana's canals, most of them of Irish origin.

Later calls for large numbers of laborers were due to the demands of railroads, not only in Indiana, but across the nation. In Lafayette, one railroad, the Monon, operated mostly within the state of Indiana—but work on such projects began later in the 1850s.

Although I don't yet have the date of the Kelly family's immigration, it is likely that the call of the railroads would not be what drew the family to Indiana, based on some inferences that they had arrived earlier in that decade. Still, it would be useful to catalog any occupational references we can glean for each member of the Kelly family during their years in Indiana. Tomorrow, we'll see if that provides any insight or connect them with others from specific regions in Ireland. 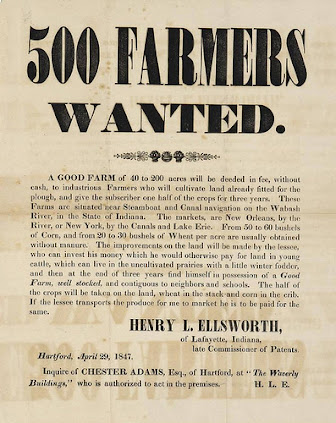 Above: 1847 poster selling parcels of farmland along the Wabash River valley in western Indiana; courtesy Wikipedia; in the public domain.

Email ThisBlogThis!Share to TwitterShare to FacebookShare to Pinterest
Labels: Kelly, Lafayette IN, Occupations