As we take a deeper dive into the history of the James Kelly family's chosen American home in western Indiana, we need to ferret out any clues about the arrival of these brick wall ancestors. Turns out that whether the Kelly family came to the Lafayette area intact as a family, or through a serial process of immigration, not only will gleaning inferences about the family constellation help us, but so will the history of the founding of this Indiana city.

One thing is certain: when the city of Lafayette was founded in 1825, the city fathers had in mind the usefulness of the nearby Wabash River, with good reason. Up through the mid 1700s, French traders' routes from Canada to the Gulf of Mexico took advantage of travel on the Wabash. While it is now no longer considered navigable to the extent of previous centuries, up through the mid 1800s, the Wabash was accessible by steamship for a considerable distance north of where it joins the Ohio River.

Lafayette, situated on the southeast bank of the Wabash River, became one of the river's shipping centers. Adding to that profitable advantage, by 1843, Lafayette became one of the stops on the Wabash and Erie Canal. The benefit of that situation to local farmers cannot be overlooked, as the route of the canal was credited with growing several of the cities along its towpath, including Lafayette. Farmers who had previously expected minimal returns for sale of their crops—unless they could be transported to larger markets—now had opened to them the opportunity to sell to a wider market. In one example of that time period, a bushel of wheat which, at best, could command a sale price of forty five cents now could be sold for a dollar each.

Water was not only the answer to commerce and especially agricultural trade, but it was the primary route for transportation of settlers. For us in modern times, it may be difficult to change our mindset about travel from that of the land routes of roads or railways to that of waterways, but as researchers it is important for us to think in terms of available navigable water routes.

The impact of river travel is an important consideration when we are exploring how our immigrant ancestors arrived at their seemingly isolated destinations. In looking to the FamilySearch wiki to find an article specifically speaking to immigration to the state of Indiana, I found it significant that the report indicated, for arrivals before 1850, that "most immigrants" reached Indiana by a water route. Not surprisingly, the result was that, of the three main regions of the state receiving in-bound settlers, land along the Wabash River figured prominently.

With an influx of settlers plus the means to favorably augment trade, it followed naturally that someone would see the value in promoting sales of land for agriculture nearby. That became the third draw by 1838 when land speculator Henry Leavitt Ellsworth published a booklet designed to promote investment in the region's agricultural advantages. By 1845, Ellsworth put his money where his mouth was, and moved from his native Connecticut to oversee sales of the ninety three thousand acres he had purchased around Lafayette.

While all those benefits of the Lafayette area make promotion seem a logical move for the young city, we still need to ask ourselves what the motivation might have been that drew such immigrants as the Kelly family to this—rather than any other—location. Far beyond the generic promise of profitable farming, we need to examine just what the Kelly family—and other Irish immigrants like them—might have found attractive about a relatively new region such as the Wabash River area near Lafayette. We'll consider more details about what drew the Irish to Indiana when we return to this topic on Monday. 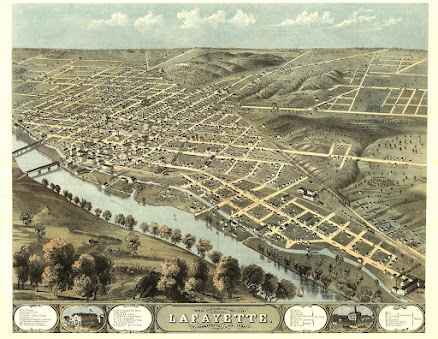 Above: The Wabash River is clearly featured in this 1868 "bird's eye" map of the City of Lafayette, distributed by the Chicago Lithographing Company from artwork by A. Ruger; courtesy United States Library of Congress via Wikipedia; in the public domain.