"Do You Recognize Them?"

Quietly last month—or maybe even earlier, considering the stealth approach—a question appeared on the DNA Matches page on Ancestry.com. "Do you recognize them?" the question asked of DNA test administrators.

If there was any fanfare for this arrival, I missed the hubbub. I thought it was a silly question to ask. After all, the only thing to do with my two thousand first through fourth cousins was tap dance as fast as I could to identify them and connect their results to my family tree. Of course I couldn't recognize them—until I figured the puzzle out, and then I could.

If putting everyone in their pedigreed place wasn't enough genealogical incentive, the other recent quiet addition to the DNA toolbox—that connection icon—had kept me busy enough over the past year, just trying to link cousins to their collateral lines.

So I basically ignored the question. Until yesterday.

I guess I couldn't stand the suspense any longer and had to see what happens when I click through and answer that question, "Do you recognize them?" In my case, I just picked one of the matches which already featured last year's connection icon—to which entry I had handily already affixed notes detailing the exact relationship—and answered, "Yes."

Of course, if I had chosen the other route—"Learn More"—I would have immediately been taken to the same screen you'd see if you simply clicked through on your DNA match's name.

The "Yes" result, however, led to a series of questions. First was the query concerning which side of my family this DNA match belonged: maternal, paternal, or both. For those in doubt, there was the fine print underneath, offering the choice, "I'm not sure."

Once that was responded—most of my matches seem to be for my mother's side, and the same goes for my husband's DNA list—the next question inquired about the exact relationship. A few clickable choices are offered up, though for almost all of them I worked on, the first round didn't present the choices I needed. Below that was the option, "Show more possible relationships," which I seemed to devour voraciously in my series of attempts.

What was interesting to notice about these relationship possibilities was the percentages appended to the left of each choice. The relationships with higher likelihood of occurring were listed toward the top, and the numbers decreased from there, once I extended the drop down menu. Isn't it just like me—and those I love—to end up in the outlier categories?!

I suspect the percentages were the same as those featured in The Shared cM Project 4.0 Tool beta at DNA Painter, with the relationship probabilities the work of Leah Larkin at The DNA Geek.

Once I completed the brief survey for each of the DNA matches I've already identified—which I had coded with the Ancestry connection icon—the entry for each cousin reverted to the green "View Match" button on the far right side of the cousin's entry.

A corollary to that exercise shows up in the "groups" drop down selection, where matches directed to mother's or father's side now display as a tally. 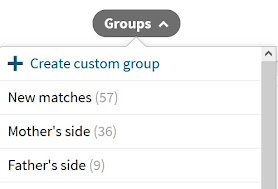 Of course, this still has me scratching my head, not so much wondering why my dad's side lags my mom's by so much—I already can credit my mystery paternal grandfather for that sign—but why the same pattern is replicated in my husband's DNA results as well (the numbers showing in the above example).

Once I discovered this handy new device at Ancestry DNA, I searched to see if anything had been written up on the feature. While I couldn't find any blog posts at Ancestry detailing this new development they've implemented, once again, my fellow blogger in New Zealand, Fiona Brooker of Memories in Time, was quick to spot and thoroughly describe what to expect with this change. (Not surprising, as she's beat me to the punchline before.)

While I'm not yet clear on what the benefit might be for this upgrade, I'm happy to participate and provide any data. Hopefully, Ancestry will, in turn, use what's gleaned from this development to implement even more tools to help us ultimately fill in those mystery blanks in our family trees.