David Sowle may have spent most of his adult life in California, but he got his start in the tiny town of Onalaska, Wisconsin. There, his father had married Dora Moore, the daughter of what was deemed a "pioneer" family of that lumber region. Dora's family, in turn, had arrived in Onalaska generations before from the forested areas of Maine.

By the time David made his arrival in 1908, the town of Onalaska had been experiencing a twenty year long population slide to less than eleven hundred people. Meanwhile, the neighboring city of La Crosse was experiencing a steady expansion of their population through that same time period. It was inevitable that a young man during that time would look to the larger city for employment possibilities.

Though I may never learn how my mother-in-law Marilyn's parents actually met, in 1927, the La Crosse Tribune and Leader-Press was trumpeting the headline, "La Crosse Girl and Onalaska Man Married Saturday." David Sowle and Olive Brague exchanged their solemn vows at the parsonage of Saint Paul's Lutheran Church in La Crosse. 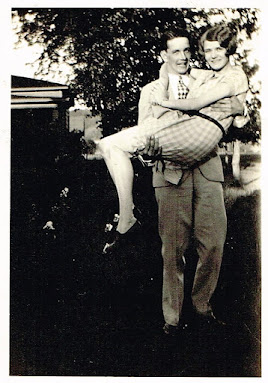 After a two week wedding trip to Chicago via Iowa, the couple set up housekeeping in La Crosse. That didn't last for long. After Marilyn's arrival the next year—plus a few more years of hard work in La Crosse—David and Olive moved their small family to southern California.

Apparently, they did not move alone. Though I can't determine who made the first move, it is easy to see that David's parents and sister also arrived at the same location. While the 1940 census showed David and Olive—plus young Marilyn—settled in Anaheim, Joe and Dora Moore Sowle and their daughter Josephine were living in neighboring Los Angeles. As David had, the elder Sowles stated they had been in California by at least 1935. Each family indicated their first stop in the state was in Los Angeles.

By 1940, Joe and Dora were in their mid fifties, so perhaps it is no surprise that they reported no occupation. Their twenty six year old daughter Josephine, by then already divorced and living with her parents, was working as a private secretary at a restaurant.

It's at a point like this when I wish I was researching a family which hadn't settled in such a big city as Los Angeles. A small town newspaper would pick up the kind of stories which could help a researcher piece together the timeline of an ancestor's life. Not so much the Los Angeles Times. And yet, I'm not left without any details on Marilyn's family—certainly not after having discovered that stash of family photographs put up for sale at a local antique shop.

While for "Aunt Jo" I don't have a tale written with many words, I am left with pictures—and isn't it those pictures which each are worth a thousand words? Tomorrow, we'll see what we can read into the several photographs I now have of Josephine Sowle from Marilyn's collection. 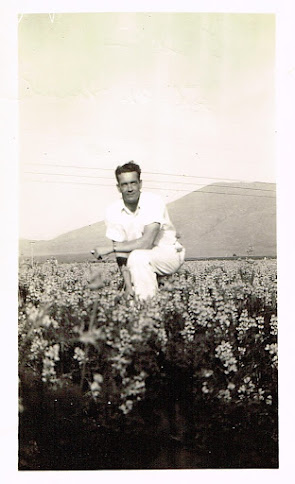 Photographs: Above, Marilyn labeled this snapshot "Mom + Dad 1928," making me wonder whether she had a specific event in mind. The photo most likely would have been taken after Marilyn was born that year, judging from her mother's appearance. Below: Marilyn labeled this one simply, "Dad," with his name written below. From the appearance of the landscape, this may have been taken near the hills that ring the Los Angeles basin, though it is hard to determine, due to the enormous population growth and urban expansion in the eighty years since their arrival in California.