Sometimes, it helps to dispense with genealogical websites' search engines and just speed read through the pages of the census to find what we are seeking. Cruising along, up close and personal, we get a sense of the territory, the "lay of the land," so to speak. When I'm not sure what to do with a brick wall ancestor, that's my first step: to take a close look and get the feel of where that ancestor was last sighted.

With my third great-grandmother Delaney, I wasn't even sure she was a Townsend until I spotted the document regarding her 1841 marriage to Andrew Charles. Sure enough, in the abysmal hand of a harried court clerk, the document assured me: 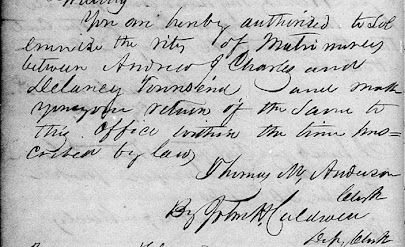 You are hereby authorized to solemnize the rites of matrimony between Andrew J. Charles and Delaney Townsend and make you your return of the same to this office within the time prescribed by law

The document was drawn up by the deputy clerk for Thomas M. Anderson in Madison County, Florida. The return was dated March 8, 1841.

If we fast forward to the next census enumeration in 1850, we see that Andrew Charles claimed that his wife was born in South Carolina, not Florida, so my first question is: how did Delaney Townsend get to Florida from South Carolina by the time of her 1841 wedding? Though Madison County is just over the state line from Georgia, South Carolina is yet another state to the north—not exactly in the neighborhood where a couple could meet up over a casual weekend.

My guess was that the marriage of Delaney and Andrew occurred either because members of the two extended families knew each other and made the long-distance arrangements, or that the families were both already resident in the same vicinity.

In cases like this, I take to speed reading through census records. If Delaney and Andrew Charles showed up in 1850 in "District 11" of Madison County, my first thought is to look for other Townsends in that same district. Using computerized search capabilities can help speed up the process, but sometimes will miss sticky issues like sloppy handwriting or misspelled names. So I opt for both methods.

As it turns out, there were several entries for Townsend families or individuals in Madison County in the 1850 census. While I can't say, at this point, that they all were related to Delaney—or that even any of them were related—I did notice a few encouraging signs.

First of all, while I only spotted one man who was old enough to have been Delaney's father—but with a wife who wasn't quite within that same promising age range—I did find several other men who might have been her brothers or cousins.

The alluring hint for that is two-fold. First, of all the Townsend households I could find in Madison County in 1850, with the exception of one woman, the adults were all born in South Carolina and most of the children ten years of age or younger were born in Florida.

That one exception? She was the wife of a Townsend, who could have possibly moved to Florida from her birthplace in Georgia before marrying in Madison County, herself.

The second interesting detail was that, as in Delaney's own family, I spotted a few Townsend men or sons bearing the name Benjamin. Delaney herself had named one son Benjamin—by 1850, a six year old. In addition, there was thirty seven year old Benjamin Townsend—whose wife Jane was the Georgia outlier in this Townsend cluster—and fourteen year old South Carolinian Benjamin Townsend in the household of Allen and Sarah Townsend. Curiously, that Benjamin's younger sister, born in 1838, was named Florida—after which the ten year old daughter following her was actually born in Florida. Sounds like that family had a plan.

Granted, none of these Townsends may be related to our Delaney. However, since I don't have anything else more positive to pursue, I'll still draw up a spreadsheet diagram of each Townsend family in Madison County, with each birth year and birth location, based on that 1850 census, to track the changes in birth locations for each family, to see if any of the groups cluster.

What would be lovely, of course, is discovering that any of those Townsends included a connection back to their origin in South Carolina. Even if I can't yet link Delaney to these other Townsend families, that could give a toe hold for some hypothesis testing, back in South Carolina. After all, there are some claims to check that I've run across from other sources. It's just that those assertions don't provide any verification, and you know I've got to at least have a way to document Delaney's connections. 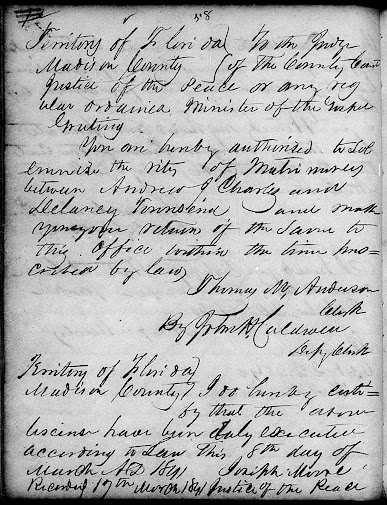