Off the Shelf: The Lost Family

The first time I heard about Libby Copeland's book, The Lost Family, was before its publication date a year ago. Somehow, I had stumbled upon an article she had written on the same topic, direct to consumer DNA testing—likely a preview of the upcoming book. I had meant to read the book ever since—along with an entire antilibrary of additional fascinating topics awaiting me. You know me.

When the author's name appeared in the advanced promotions for this year's RootsTech Connect, that little twinge of recollection prompted me to get with it and open the cover. After all, I have a voracious appetite for anything written on the use of DNA tests for genealogy—even if, as the author puts it, that includes discovery of the "disruptive fact" which may lurk within such tests.

Libby Copeland, a seasoned journalist—and, as she puts it on her own website, editor and "cultural spelunker"—has spent an entire career writing for some of the most recognized American periodicals, not to mention her years as staff writer for the Washington Post.

In The Lost Family, Copeland muses about "seekers" and "DNA junkies" and the other usuals who make up the cast of likely test-takers, then juxtaposes them with a third category, a far more unsuspecting cast of participants.

They test because they got a kit as a gift for Christmas—and then Easter dinner becomes awkward, because the test has revealed something strange.

These—at least, some of them—make up a group of test-takers who "have DNA results they'd rather not have seen." With that understanding, the author embarked on a search for people who, as seekers, are "grappling with essential questions about identity." Interviewing "hundreds" of them, Copeland arrived at the feeling that we are "embarking on a vast social experiment, the full implications of which we can't yet know."

Scary. At least, if you haven't yet attempted that possibly-fatal DNA test.

The book is a compilation of stories of seekers who did take that step, and came to regret the decision—lives "irrevocably changed," according to the book's cover. Those stories pull the reader in—more so than due to the book's promise that it was "gripping and masterfully told"—perhaps because we recognize in ourselves the same yearning to know more about who we are.

For those of us who already are entwined in the pursuit of genetic genealogy—whether blissfully free of any upsetting surprises, or deliberately chasing the explanation for surprises we'd learned prior to the advent of DNA tests—the book is a necessary read. It provides a useful overview of the rapid growth of genetic genealogy in all its permutations while connecting the dots between seemingly disparate developments tangential to the science, all woven together by the threads of the stories of seekers whose lives have been disrupted by the unexpected. 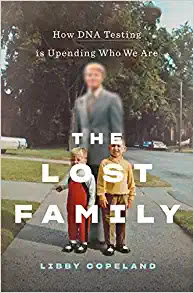 © Copyright 2011 – 2022 by Jacqi Stevens at 2:58:00 AM
Email ThisBlogThis!Share to TwitterShare to FacebookShare to Pinterest
Labels: Books, DNA Testing