About D N A

While documentation demonstrates the legal links between family members, DNA becomes that intangible token of connectivity between a far more extended web of family.

While I struggle, for instance, to get my hands on a document—any document—showing the parents of my third great-grandmother, Delaney Townsend Charles, I am already buried under an avalanche of DNA matches saying it is indeed so that Delaney was daughter of John and Keziah Hays Townsend.

At least it seems like that is what it's saying.

Of course, one possibility for the eighty seven other subscribers who show up on my Thru-Lines listing for Delaney's father is that they, too, have all copied the same unproven name into their own tree. Yeah, our DNA might be showing us that we are all related, but that doesn't mean the most recent common ancestor who started this whole deal had to have been John Townsend. That's one risk of copying family trees—online or off.

On the other hand, I have great faith in what a DNA test can show us about our relatives. Of course, the more distant the relationship, the less reliable the signal. In fact, there are some family relationships—generally, more distant than third cousin—where the DNA test route may show you nothing. It doesn't mean that person is not family; it just means that the genetic material from the distant ancestor you have in common with that relative got passed down to you, but not to your fourth cousin.

Let's take a look at the dynamics of comparing DNA with other Ancestry subscribers who claim John Townsend in their tree—or whatever other mystery Townsend the ancestor might have been. If Delaney was my third great-grandmother, searching for DNA to point to her parents requires me to seek descendants of my fourth great-grandparents who share DNA with me. That means, if we are talking a straight-across relationship, we are seeking fifth cousins.

Hmmm...with just this thumbnail sketch of the possibilities, it would be a slim chance to find that I and anyone else share that small an amount of genetic material. But let's take a look at what the possibilities are.

First, let's consult with Blaine Bettinger's Shared centiMorgan Project, handily shared in an interactive format on the website DNA Painter. Blaine Bettinger gathered the data from more than sixty thousand submissions to examine genetic measurements by type of relationship. For instance, he gleaned the centiMorgan measurement for all submissions containing relationships of fifth cousin and came up with a chart like this: 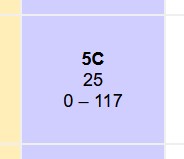 The first number directly under the label for the type of relationship specified—in this case, 5C signifies fifth cousin—shows the average number of centiMorgans for that specific relationship. However, to give an idea of the range of possible measurements, the third line provides the smallest given count—in this case, zero, as at this distant relationship, not all fifth cousins will inherit the specific ancestor's genetic material—and the second number in that same line provides the largest amount seen for this relationship within the collected data set.

Gleaning the results from this collection of data tells me a few important clues. The first is that, no matter who Delaney's father turns out to be, there is a good possibility that I and any other given distant Townsend relative may share absolutely not one smidgeon of genetic material. On the other hand, there is a chance that two Townsend fifth cousins could share as much as 117 centiMorgans, a substantial amount. But the long and short of it is that several Townsend fifth cousin matches will see a result hovering around twenty five centiMorgans.

Of course, that is considering I and a DNA match happen to be related at the simple level of fifth cousin. My family tends to have what some call long generations—in other words, the number of years between generations is higher than the average span. If a match happens to come from a family with shorter generational spans, the relationship might be, say, fifth cousins once removed. Or more.

With each additional distance between DNA matches, the average centiMorgan count decreases—and the likelihood that no genetic material is shared at all also increases.

All that to say, looking for a DNA match whose data can lead me to the answer I seek—who is Delaney's father, for instance—becomes a more difficult search, the farther removed the relationship becomes.

And yet, I have no other option through DNA testing, for seeking a closer cousin means comparing notes with someone for whom I already have documentation concerning the relationship. On this thin illusion of a relationship I hover between the smallest slices of chromosomal material—and yet, I have well over eighty examples of how I may share DNA with other Townsend descendants.

If, that is, their family tree is well documented and correct. And there's the rub: any contemporaneous record listing the children of John—or the parents of Delaney—is, so far, still out of my grasp.