It has been twenty six days of serious searching, and I am still no more enlightened than when I started my latest research project. I am not any less "stuck" on the puzzle of my third great-grandmother's parents than I was at the beginning of this month. Try what may seem reasonable, I haven't been able to locate any confirming documentation demonstrating that the oft-affirmed John Townsend of Marlboro County, South Carolina, was indeed father of my Delaney Townsend Charles. On the other hand, neither have I been able to locate any records pointing to someone else as her father.

Since the earliest record I have found which specifically named Delaney Townsend is her 1841 marriage record in Madison County, Florida, the thought has struck me that it seemed odd, given the time period and the territorial status of the land at that time, for a single woman from South Carolina to be on her own, hunting for a husband well over four hundred miles from her (supposed) parents' home.

What if Delaney Townsend's parents weren't John and Keziah Townsend? The elder Townsends were said to have had several sons who had migrated to northern Florida to acquire land, including two—Allen and Benjamin—whose descendants are my DNA matches at Ancestry.com. Though lack of satisfactory documentation causes me to hesitate at assuming John was my ancestral root, there are plenty of resources to trace the lines forward from either Allen or Benjamin.

That, then, became my brainy idea of what to do next: to at least examine the documented lines leading from those Townsend DNA matches to the specific Madison County, Florida, Townsends. Mainly, the idea is to examine any historical references which could shed any light on why Delaney might have gone to Florida with any of these other Townsend men. Whether her parents remained back in South Carolina—or turned out to actually be one of the Townsends who settled in northern Florida—at least I could access reliable documentation to lead me back to that Townsend generation.

First step was to head to my DNA match list at Ancestry.com to look up all my matches whose tree contained the surname Townsend.

That's about as far as I got. What I saw there transfixed me. I'm a sucker for Bright Shiny Objects. And I saw one.

I had first read about this change at Ancestry.com last week, when I perused Randy Seaver's "Best of" column on his blog, Genea-Musings. There, leading off last week's list, was an article appearing in Memories in Time, the blog of New Zealand genealogist Fiona Brooker. The article detailed an update for Ancestry.com's DNA match listings.

I read the article through, but though it appeared back on March 15, the appearance of the panel announcing the change, posted on Fiona's blog, did not look familiar to me.

Not until last night, at least, when I got my Brainy Idea to pursue the other Townsend families who were Delaney's neighbors in northern Florida. First thing I did was pull up my DNA match list to search for matches with the surname Townsend in their tree.

Actually, I should say I tried to pull up that match list. Before I could get to the spot I wanted, I was confronted with a card looking much the same as the one in Fiona's blog. 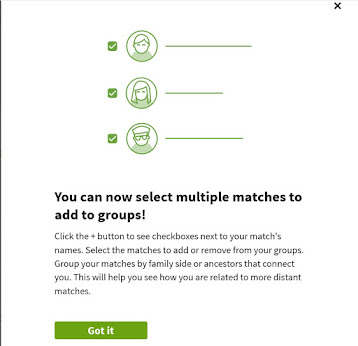 Clicking through, I found that I did have that Ancestry update, after all. It just got to New Zealand sooner than it arrived in California.

Everything looked so different that, rather than stay focused on my current research mission, I had to take a look around. I noticed several additions besides the heralded ability to "select multiple matches to add to groups."

For one thing, the shared genetic material is now given in two formats: centiMorgan measurement and percentage. Matches' trees, where available on Ancestry.com, are now either called "public linked tree" or "private linked tree." Most convenient of all: any notes I've made on a particular match can now be seen directly under that person's entry on the match list. No more hunting for where I parked a note to myself on a specific individual. And to the far right of that same bar is the edit pencil which, when clicked, allows the quick addition to, or removal from, the designated family groups I've already set up.

The tabs at the top of the match page seem to remain the same as before, which is fine for me. Too much re-arranging of the "furniture" on a web page causes too much down time while the weary eyes seek whatever became of favorite features. No problem with this change: the items now added to the match entries speed the process of organizing my matches, while the familiarity of the tabs in the header keep me grounded in the functionality I already have come to appreciate.

And with that bedazzled moment of oooh-ahh over the Bright Shiny Object, I'll now be back to delving into those Townsend neighbors of the single, marriageable Delaney. Now, it's back to 1840s Florida territory, wondering just what brought that single woman four hundred miles from home at a time like that.