When I woke up yesterday morning, it was snowing. No, I do not live in the southern hemisphere. It is summer here. In fact, where I live in California, we have been experiencing nearly a week of an inexhaustible heat wave, punctuated only by the scantest respite of rain on Sunday, which, unfortunately, brought accompanying lightning strikes. Hence, the fires. Which caused the snow—a literal snowing of ashes, wafting down from the sky like snowflakes as I headed outside in the morning to run my errands in town.

It wasn't my choice to get such an early start to the day, but apprehension has a way of waking a weary soul up earlier than the accustomed hour. Yesterday was the day when my sister was scheduled for her cancer surgery—another cancer surgery. I wanted to connect with family ahead of time to check progress and ask all the questions nervous family members want to ask.

Before I got the chance to make that call, though, something else popped up—a sad message from another family with much greater worries on their mind. A friend of our family had contracted the corona virus in mid-July and, despite all appearances of vitally and strength, eventually needed the assistance of hospital staff to overcome the disease's trajectory. All eyes of her many friends were on her Facebook page, as her husband and children posted daily updates and prayer requests. After nearly two weeks on a ventilator, this same morning was the moment in which they posted the news of her passing with their mournful goodbyes to that loved one.

Numbed with all the emotions swirling inside, I headed out to wrap up those errands, oblivious to the smoke, the reddened sun, the eerie feel to the ambience surrounding me. And then I noticed it: the white flecks wafting down, swirling in the breeze, falling at my feet like drifts of snow. It was like everything left was reduced to ashes. I needed to finish those tasks and get back inside. Let that mind wander and unwind. Overload.

Once inside, with no motivation to work, not even that quest to discover the family connections between our Kelly, Falvey, and Sullivan roots in County Kerry could divert my attention. I poked listlessly through my email, but spotted an alert, telling me of a new comment made on a very old blog post.

It was a post written during our family's adventure in Ireland, almost six years ago. We had driven out to the area around Killarney, trying to figure out just where John Kelly and Johanna Falvey had once lived. I had already poked around, before our trip, in every record set I could find online with no definitive direction, but I had noticed a Kelly baptismal record linked to the Civil Parish called Molahiffe, and an entry in Griffith's Valuation showing a man named John Kelly in a townland called Lisheennacannina. That six year old post was my explanation of how we had tried to obtain directions to that townland from our host, who happened to notice that our John Kelly was neighbors with a Michael Sullivan—same name as her grandfather! We followed her map, but despite the help, got lost and stumbled upon an old cemetery nearby, instead.

"Did you find where he may be buried," my reader yesterday inquired in the comments, adding that Michael O'Sullivan was her ancestor from that very same townland.

In my daze, given the day's downward spiral, I poked mindlessly through some old records, backtracking through years of research, when it finally dawned on me: wait! I now have Sullivans connected to my Kelly line. Maybe that is a slim connection, but it could be telling me there is something more than just a neighborly connection between the Kelly and Sullivan households in Lisheennacannina and the Kelly and Sullivan household in Toledo, Ohio.

In the end, that was all the research effort I was able to muster during a day like that. Although I know my friend will never be coming back, it turns out that my sister may have gotten the best possible bad news she could have received, once over the hurdle of yet another surgery. While the "snow" outside on the ground will not be "melted" by tomorrow, hopefully a little clearing of the mind will enable me to catch that little clue and run with it another day. 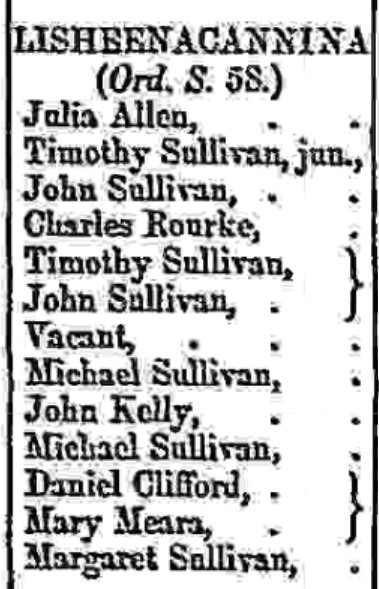 Above: A man named John Kelly in the midst of several Sullivans in Lisheennacannina townland of County Kerry, Ireland, according to the Griffith's Valuation; excerpt of document from Ask About Ireland.

© Copyright 2011 – 2022 by Jacqi Stevens at 2:54:00 AM
Email ThisBlogThis!Share to TwitterShare to FacebookShare to Pinterest
Labels: County Kerry, Falvey, Ireland, Kelly