The Necessity of Newspapers

You may find it odd—well, at least those who know my longstanding aggravation with editorial errors—to see me tout the necessity of newspapers for family history research. However, just for today, let's give newspapers a break. After all, who hasn't found an error in, say, a death certificate or, worse, a headstone?

Especially in the case of my husband's Kelly family roots in Fort Wayne, Indiana, and their connection to a spinster aunt in Toledo, Ohio, I had long wished I could access the newspaper archives for the Toledo Blade. Remember, I had first discovered Timothy Kelly's relationship to Margaret Kelly of Toledo years ago. What had prevented me from making more progress was, in part, the inaccessibility of those Toledo newspapers.

As it turns out, though the main newspaper archival services used by genealogists lack the very issues I was seeking, there was—eventually—a resource open to me. Better yet, it is available to all, free of charge.

That resource is the Google News service which has scanned archived editions of several newspaper publications from around the world. Of all the cities they could choose to include in their gratefully-received collection, Toledo was one that made all the difference in this particular family history search.

Yes, in the meantime, through subscription services like Ancestry.com, and nonprofit operations like FamilySearch.org, I've found quite a few documents to extend my discoveries from that one aunt in Toledo—Margaret Kelly—to her Sullivan niece and nephew from County Kerry, Ireland, and even further to her grand-nephews, the Sullivan boys from London, England. But sometimes, those documents seemed to contradict each other, or leave questions as to the specific relationship between each member of those subsequent generations of Sullivans.

How I discovered that Toledo resource at Google News, I can't even remember now, but it was a recent find. While the collection is by no means complete—there are some missing issues, and some editions include unfortunate gaps of white space where the obituary I was seeking was surely obliterated—it does cover a wide span of publication, and also includes a second Toledo newspaper from a previous era.

Once I oriented myself to the complete range of options in using the Google News service—you can clip a specific "article," for instance, allowing a researcher to capture the exact URL for that particular obituary—I set about harvesting every obituary I could for this extended Sullivan family.

I found, for instance, a fuller description of just what happened to the youngest of the three Sullivan sisters who lived with their Aunt Margaret. 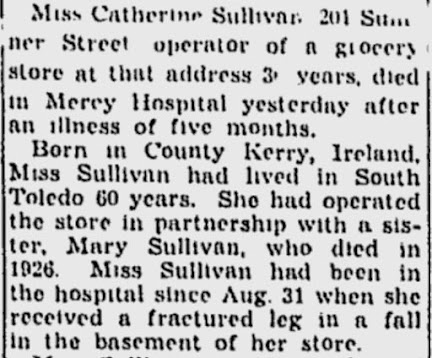 Miss Catherine Sullivan, 201 Sumner Street, operator of a grocery store at that address 3- years, died in Mercy Hospital yesterday after an illness of five months. Born in County Kerry, Ireland, Miss Sullivan had lived in South Toledo 60 years. She had operated the store in partnership with a sister, Mary Sullivan, who died in 1926. Miss Sullivan had been in the hospital since Aug. 31 when she received a fractured leg in a fall in the basement of her store.

In addition to confirming we have the right Catherine Sullivan—always a possibility to keep in mind with a surname as common as Sullivan—the newspaper entry corroborated what we already had discovered about this Sullivan family in an obituary which continued for two further paragraphs. The piece also added the useful details of married names for female relatives. The article even included the occupation and specific place of employment for one of her nephews, the John Sullivan whom we discussed last Friday.

These are the types of details so pertinent to any genealogical pursuit, but doubly so for those having names which easily could be duplicated by other residents of the same city.

Newspapers, however, can sometimes add more details than we would suspect, as we can see in searching for John Sullivan's own obituary, published years later. In addition to alleviating my concerns that I might have found the wrong John Sullivan in that marriage license the next state over—it included his wife's maiden name in the obituary—the article also provided an expanded explanation about John Sullivan's early personal history. 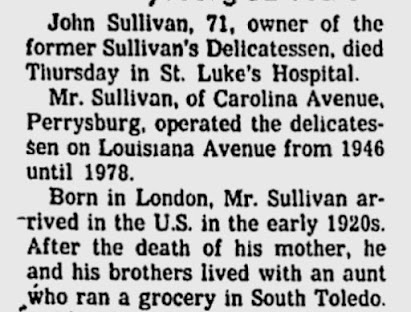 John Sullivan, 71, owner of the former Sullivan's Delicatessen, died Thursday in St. Luke's Hospital. Mr. Sullivan, of Carolina Avenue, Perrysburg, operated the delicatessen on Louisiana Avenue from 1946 until 1978. Born in London, Mr. Sullivan arrived in the U.S. in the early 1920s. After the death of his mother, he and his brothers lived with an aunt who ran a grocery in South Toledo.

In addition, the obituary added some possible clues about what became of the Sullivan brothers' parents, which will redirect my research approach. I had at first presumed that the brothers had left England shortly after the devastation of the first World War, leaving parents and possibly other siblings behind. This article, however, hints at the possibility that either their mother, or possibly both parents, immigrated to Toledo along with the boys. That the boys might have been orphaned at the passing of their mother is now a distinct possibility, leading to further searches for death certificates in Ohio, rather than only in England.

While the details offered up in newspaper articles must always be viewed with the skepticism that comes with prior experience of editorial errors, newspapers are an excellent source of corroboration and expanded information, especially when researching ancestors with those all-too-common names. They can confirm we are on the right track. Or they can put up the necessary road signs to warn us to turn back and take a different route.