Some family history researchers might approve of the sentiment, "If the shoe fits, wear it." I, on the other hand, try a more multi-faceted approach. Perhaps it's because I want a specific place identified for each of the ten toes growing out of the messy research problem I'm currently tackling.

I once heard a genealogy speaker—Kathryn Miller Marshall, Ph.D.—compare the task of identifying a specific ancestor to fitting a hand in a glove: there needed to be a just-right fit to take into account each of the five fingers of a research problem. So let's just say this Sullivan problem of mine is going to be a two-gloved tackle.

Face it: researching common names is a task which brings its own set of complications. Researching a Smith in England is going to be far more challenging than finding, say, a Byczynski in Kansas. While Sullivan is not quite as common a surname as Smith, it does present its difficulties, both in searches in Toledo, Ohio, where I first found them, and back home in Ireland—not to mention in their midpoint residence in the vicinity of London, England.

So I tend to trace more details than just dates of birth and death, or names of parents. In our Sullivan case, I've often been deprived of even those parents' names, as either the Sullivan nieces of my Kelly connection—the Sullivans' spinster aunt, Margaret Kelly—or the nephews of the subsequent Sullivan generation seemed either to be orphaned or to have left home at an early age.

One helpful detail, in the case of this extended Sullivan family, was their home address: 201 Sumner Street in Toledo, Ohio. In sifting through all the possible Sullivan documents, I often felt as if I had no lead to follow—but then, I'd spot that telltale address, and realize I was looking at the right person.

That was one confirmation for young Edward Sullivan, nephew of sisters Mary and Catherine Sullivan who ran the grocery store at 201 Sumner Street. In his draft registration card for each of the two World Wars, I could be certain I had found the right Sullivan by the telltale address. 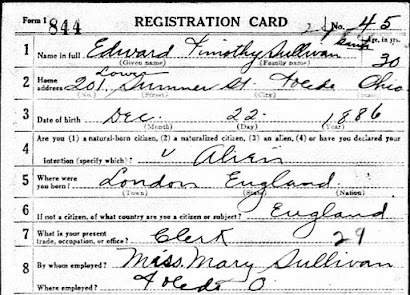 Then, too, because I had begun building out the extended family constellation, I could spot relatives' names included on the documentation as well, and know I was following the right trail. In Edward's case, I already knew his employer was his aunt, Mary Sullivan, who with her sister ran the family's grocery store. This draft registration card confirmed what I had already discovered.

In the meantime, it allowed me to glean pertinent additional details with confidence, knowing those other fingers of information fit into the research glove just fine. In Edward's case, this record also confirmed his birth in England, and added to that information with the specific date.

Building on the specifics of what I had already learned about this Sullivan family, I soon had enough of a tree sketched out to include several generations. In the meantime, however, I learned one alarming detail about this family: not all the information they provided was always perfectly true. Witness one Sullivan report, in his marriage license application, where he claimed he was born in Toledo, not England. 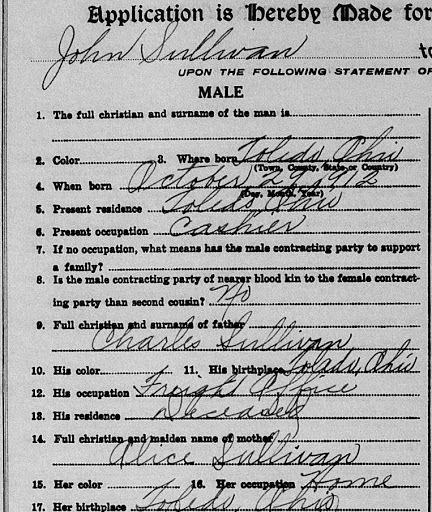 What was I to do with that? Could it have been the wrong Sullivan? After all, there must have been multiple John Sullivans in that area at the time of this 1936 application. Yet, I held on to that clue, just in case.

As it turned out, after checking other documents for the extended Sullivan family, it became clear that John and his beloved had stepped over the state line for their wedding, and perhaps wanted to appear older than they truly were. As it turned out, John's day and month of birth were exactly correct—it was just the year that had been augmented. Perhaps in that nervous moment, he also chose to misrepresent the fact that not only his parents but he, himself, had been born on foreign soil.

In comparing documents with each other, and among all the members of the extended Sullivan family, it was possible, in the end, to push the envelope further out on what could be known—and confirmed—about each individual within that circle. The name of a parent, for instance, couldn't just be taken at face value from the report of one document, but needed to be corroborated through finding a series of documents.

Piecing together the family story required moving from what was known—often, as slim a clue as the address of the home where they had been staying—to what was yet to be confirmed, but it always required each beckoning finger to be a proven best fit for the required glove of comparison.

© Copyright 2011 – 2022 by Jacqi Stevens at 2:46:00 AM
Email ThisBlogThis!Share to TwitterShare to FacebookShare to Pinterest
Labels: Indiana, Ireland, Kelly, Ohio, Sullivan