If you are as cautious as I am about family history research, you may find yourself constantly double-checking the dates associated with the names you are assembling in your family tree. Especially when it comes to the report provided on the heels of a close family member's death, mistakes can happen. From what I've seen in my own research, mistakes happen often.

That, of course, is understandable. There are few moments more stressful than the point at which we discover a loved one has died. Even the most even-handed and steady among us can find ourselves tongue-tied at answering the most basic of questions. We find ourselves blurting out the wrong maiden name for a grandmother, for instance, or offering an incorrect place of birth.

"Just in case," I remind myself, I need to verify that the report offered in one document has some corroboration in another record. So when it came to the deaths of the two Margarets I've been tracing in Toledo, Ohio, I couldn't just stop there. Sure, the younger Margaret had two Sullivan sisters who eventually moved into the same household, but upon their death, did the records match up? Confirming these records of the two Margarets with the elder Margaret's other nieces will prevent me from chasing after the wrong Kelly or Sullivan ancestors back in County Kerry. And that was the whole reason for my paper chase in the first place: this might allow me to determine the right cluster of family members, back in Ireland.

The first question to pursue is whether Margaret Sullivan, niece of Margaret Kelly, had her parents' names reported correctly on her 1907 death certificate. I was elated to see her mother's name showed up as Abbie Kelly, firmly supporting my conjecture about the Kelly connection. But what if that was a mistake?

My next possible resources followed the death of Margaret Sullivan's younger sister Mary. While not showing in aunt Margaret Kelly's household in 1900, Mary Sullivan was in Toledo in time for the 1910 census, taking the younger Margaret's place in the home at 324 Saint Mary's Street. Then, moving by the time of the 1920 census to the location on Sumner Street, we can see where the sisters operated a grocery store along with their recently immigrated Sullivan niece and nephew.

At the point of Mary's passing on November 2, 1926, hers was a death notice as unhelpful as those of her aunt and older sister—further complicated by the partly illegible digitized copy of the November 3 edition of The Toledo News-Bee where it was published. Thankfully, a funeral notice was inserted on the ninth page of of the subsequent day's paper, at least confirming the right address. 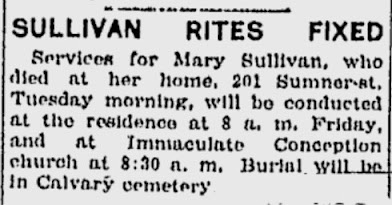 Services for Mary Sullivan, who died at her home, 201 Sumner st, Tuesday morning, will be conducted at the residence at 8 a.m. Friday, and at Immaculate Conception church at 8:30 a.m. Burial will be in Calvary cemetery.

Since the main point here was to check Mary's death certificate against the information provided in her sister's death record back in 1907, let's take a look at what can be found for Mary Sullivan. Once again, the informant was her sister, listed this time as Catherine Sullivan. The now much older Katie turned out to be a reliable reporting party, for the record remains the same. Again, Catherine reported that their parents' names were John Sullivan and Abbie Kelly—although the handwritten document rendered her mother's given name more like "Albie."

Ironically, by the time Catherine herself passed away, her own 1942 death record contained exactly the words any genealogist hates to see. For each of her parents' names, the reporting party—Catherine's niece, yet another Margaret—stated, "Unknown."

Thankfully, if nothing else was provided on her February 5, 1942, death certificate, the family was firm in insisting that her place of birth be reported not simply as Ireland, but as County Kerry, Ireland. Since we already had had a suspicion that all this documentation would bear that out, perhaps it's time to take the leap across the "pond" to see what can be found on these Sullivans and Kellys, back in their homeland. 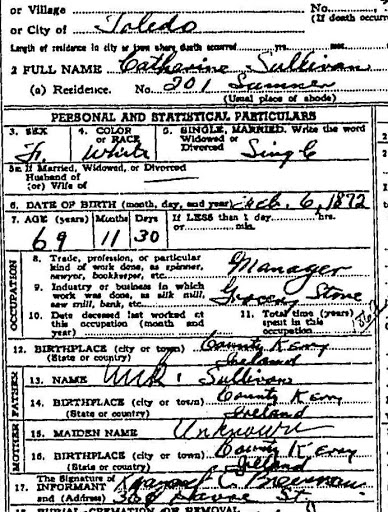