Off the Shelf: Far, Far From Home


I know it's not Saturday—when I usually post such items as my favorite upcoming reads—but hey, I'm still languishing with this fever, though not quite knocked out enough to sleep away the days. So I read.

Right now, I'm about one-fifth the way through the collection of letters home from the Civil War front by Confederate soldiers (and brothers) Dick and Tally Simpson, Far, Far From Home. Compiled and annotated by Guy Everson and Edward Simpson, this 1994 volume, as did my experience reading Emmala Reed's journals, provides me very personal vignettes of the life and times of relatives of my ancestors.

"Tally" was Taliaferro Calhoun Simpson, and "Dick" his younger brother, Richard Wright Simpson. They were sons of my fourth great-aunt, Margaret Taliaferro, and her husband, Richard Franklin Simpson. Thankfully, the book organizes the cast of players—at least those from the extended family—according to relationships, so that the reader is informed of the connections, but you know I already have that diagrammed in my own family tree.

I've taken to reading these books concerning family members much as I have handled other books I am studying. First—and unabashedly—I'm reading slowly, bucking the trend to speed read for success (whatever that is). I take my cue from an old book I found useful in my homeschooling years, which I code-named the "How to Read a Book Book." By philosopher and educator Mortimer Adler, the book's title is literally How to Read a Book, and though it seems old-fashioned—it was originally written in 1940—it provides much thought in how to extract the most out of a volume.

Armed with those tiny Post-It flags, I am now off to pursue—and tag—any mentions of my direct line ancestors from the little town of Pendleton, South Carolina. Just as I did with the Emmala Reed book, I flag each footnote that needs to be double-checked. I'm especially on the outlook for any items which reveal relationships which are not already recorded in my own family tree—never know when such a detail might multiply out to connect with a current-day DNA match.

In the meantime, the flavor of the letters themselves, and the commentary provided by the editors, allow me to get a sense of life in general in Pendleton among the relatives of my ancestors. I never dreamed I'd have such a wonderful opportunity to catch such a glimpse, but here I have received that opportunity, thanks to such books, not once but now twice. If I can't get much of anything else done this week—I'm missing out on a wonderful mini-vacation in Monterey on account of this illness, by the way—at least I have some enjoyable reading in store. 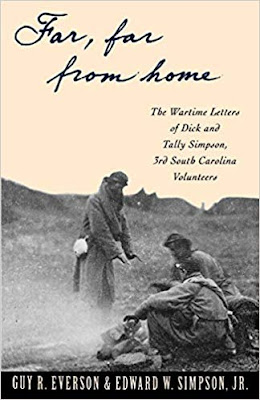