Just at the point at which I was going to call it quits and stop puzzling over that mystery photograph from Guelph, Ontario, the ongoing conversation with the Reed family researcher I found via Ancestry brought up one more question: what about James Henry Reed's daughter Victoria Ellen?

James Henry Reed was the one Reed brother I had mentioned yesterday in that litany reciting the universe of possible Henrys to be the subject in the hundred year old photo I found. James Henry Reed's son—eligible on account of his name being Henry—I had already dismissed out of hand because he was married by the time our mystery photograph may have been taken. My reasoning was that it would be unlikely for this Henry to sit for his photograph with another woman—even if she was a cousin—because he was already married.

While that was a valid point, it was only true up until 1898, when that Henry Reed's first wife died. Between that date and 1904, the date of his second marriage, he was a widower. If the photograph was taken at the later end of our possible date range, it could have been this Henry who was featured in the photograph with our unnamed daughter of John Holmes Reed.

What makes that an interesting possibility is that this Henry—just like another of his cousins we had been considering—had a sister who moved to California.

The only problem with that realization: those Ancestry subscribers who include this sister in their family tree have noted the wrong California county in their records.

Hoping that the full date of death provided in some Reed family trees on Ancestry was correct, I entered the woman's first name only—those records all had her listed as still unmarried—and searched in California with the exact date of death. Then, with the search result showing a possible married woman with the same first name, I turned to newspaper archives to locate any obituaries under that exact name which might help determine whether that married woman was the same as the person I knew only by her maiden name.

With that, I discovered some interesting clues about Victoria Ellen Reed, this Henry's sister and daughter of James Henry Reed of Ontario, Canada. Victoria had married an Englishman by name of Fred Herring. For a while, they lived in Minnesota—long enough to add four children to their family—and then they headed to California.

What is interesting about this couple is that they were considered "early settlers" of the area in which they made their home in California—the small town of Rio Linda which, today, is just across the state highway from the Sacramento airport. Furthermore, as an echo of Victoria's grandfather, her husband served as Rio Linda's postmaster.

Of their two surviving children, Fred and Victoria left a daughter, Bertha, and a son, William Reed Herring. Bertha, in her younger years, served as a teacher in Turlock, California, not far from where some cousins eventually settled. Her brother, known as Reed, moved to Truckee in the employment of one of the railroad companies, but eventually joined the National Guard and could be spotted in newspaper articles mentioning his location in various northern California cities.

Whether either of these two surviving children of Fred and Victoria Herring ever inherited a copy of the photograph of—maybe—their uncle Henry Reed, I can't be sure. All I know is that it makes more sense for the Canadian Henry in the mystery photograph to be associated with a family member who had connections in northern California. After all, that's where I found the photo, over one hundred years later. 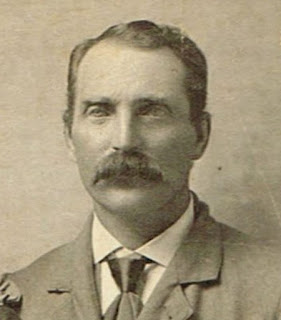