No, His Wife's Name was Not Mimosa


I was quite excited, if you recall, to discover that the John Reed I had found in the Wellington County, Ontario, directory came with a middle initial H. Why? Because H, in my hopes, would equate to the given name Henry. And the hundred year old photograph I had found in an antique shop in northern California had a note indicating that the man in the photo was named Henry. I fervently hoped this man in that city directory preferred to go by his middle name.

However, when I found my possible John Reed in directories for the area indicated by the photography studio's location—the city of Guelph in Ontario, Canada—it turned out there were other details I needed to discover.

For one thing, in American city directories, it was common, during that era, to list the husband's name followed by the wife's given name in parentheses. An example would be this 1934 city directory for Tampa, Florida, where my great grandfather, a dentist, had his office:

When it comes to reading directories north of the border, however, that rule doesn't stand. Take a look how John H. Reed's entry was printed.

My first assumption, from years of experience, would have been to understand Mr. Reed's wife's name to be Mimosa. An unusual name, to be sure, but not an entirely impossible choice for her doting parents' precious baby daughter.

As it turned out, a good look around at the page in the directory which included John Reed's name revealed that quite a few men of that era seemed to have chosen, as their life's companion, a woman with the same name: Mimosa.

Perhaps, if you found that discovery as unusual as I had, you would then be prompted to flip to the front of the book and see what could be found to orient you to the details of the abbreviated entries to follow. And there, as I had, you would learn not only what claimed its rightful place within those parentheses, but also to what details the "con 1, lot 27" entry referred. 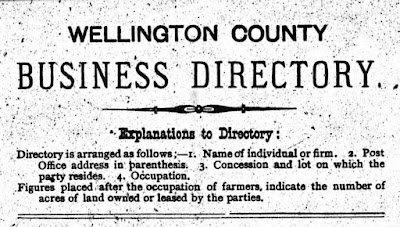 Explanations to Directory:
Directory is arranged as follows;--1. Name of individual or firm. 2. Post
Office address in parenthesis. 3. Concession and lot on which the
party resides. 4. Occupation.
Figures placed after the occupation of farmers, indicate the number of
acres of land owned or leased by the parties.

John H. Reed, a resident listed in the section of the 1884 Wellington County directory for a place called the Township of Erin, actually lived in a tiny place called Mimosa. This hamlet, as it was called at the time, turned out to have an interesting history, one which was intertwined with the Reed family history as well.

Though originally settled by the British and, in particular, the Irish in the 1820s, Mimosa didn't appear as a separate geographic entity until residents of the area lobbied for their own post office in the late 1850s. When the request was granted by the postal authorities in 1860, the first postmaster named to the new Mimosa post office was a man by the name of Henry Reed. This Henry and his wife, Ann Holmes Reed, were the parents of twelve children, youngest of whom was named John Holmes Reed.

That John Holmes Reed—the very same John H. Reed we've spotted in the Erin Township directory from 1884—turned out, as the directory indicated, to have land labeled as concession 1 and lot number 27, located within that tiny hamlet known at the time as Mimosa.

Yes, the H turned out to represent the name Holmes, not Henry as we had hoped. His wife's name, rather than Mimosa, was actually a more pedestrian Margaret. 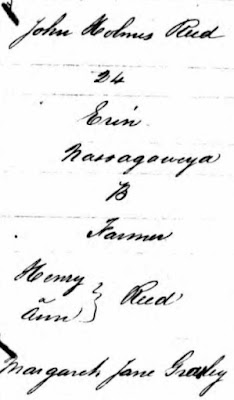