They don't call it an exhaustive search for nothing.

As we try to figure out the puzzle of just which Henry Reed might have been seated next to John Reed's unnamed daughter in a photograph taken in Guelph, Ontario, in the late 1800s, we discover there are more options to consider than we'd like to see. We've already considered the son of John Reed himself, a man named John Henry Reed—and discarded this possibility because, in comparison to his older sisters, he was younger-looking than the relatively older appearance of the man in the photo.

We've considered the spouses of John Reed's daughters Lavinia and Mary, and even their baby sister Nellie—but none of these daughters married men named Henry.

We've begun on the jump up to the next generation, to see who might have been a cousin to John Reed's daughter. So far, we're not quite sure about Henry Easton, son of John Reed's sister Francis, despite the fact that two of this Henry's sisters later moved to California, where I eventually found the photograph in an antique store. Besides, Henry had homesteaded in Nebraska, and though he was a single man at the time, it is doubtful that he would have returned to Guelph during the time span in which the picture was taken.

Francis, however, was not the only possibility for parent of a child named Henry. John and Francis had an older brother named Henry, who, predictably, named his own son Henry. This Henry, born in 1851, would have been in his late thirties by the time of the picture with John Reed's daughter. However, by that point, that Henry would also have been married and father of at least five children of his own, hardly a likely candidate for a pose with a single woman, cousin or not.

Not to lose hope on this survey of eligible Henrys. There were other candidates. Take, for instance, the fact that John, Francis and Henry had another sibling whose middle name was Henry. That man—named James Henry Reed—also had a son whom he named Henry. Born about 1854, that Henry, also, was married by the time of our mystery photograph, making him another unlikely candidate among all these potential cousins named Henry.

Well, how about another sibling? There was an abundant supply, thanks to John Reed's parents. What about his sister Margaret? She, too, named a son Henry. Born in 1858 in the same Erin Township where John Reed's family lived, if only this son of Margaret and her husband Gideon Awrey had married a decade later, we might have been able to consider a possible match between him and his cousin implied by our mystery photo. But no, this Henry was married by 1883—at the closest, three years before the first possible date of the photograph—making it unlikely that he would sit for his picture with a different woman, even if she was his cousin.

There is, however, one more Henry. Reed brother Robert Alexander also had a son who might—if he preferred using his middle name to his first name—have qualified for our mystery Henry. This son of Robert was born later than all the other Henrys, in 1867. He was, by the possible date of the photograph, likely unmarried, as he didn't tie the knot with Lydia Martha Johnston until 1893. Despite that promising detail, there is one problem with this possibility: with his date of birth in 1867, he would have been only a few years older than either Lavinia Reed (born in 1872) or her sister Mary (born in 1875). Unless he aged prematurely, his appearance would likely have not given that same sense of age difference as we can see in the photo.

After all those considerations, despite all that information, it seems the most likely candidate—at least, solely by the numbers—would have been Henry Easton, son of John Reed's sister Francis and her husband George Easton. It would have been serendipitous if we could have found a diary, or another photograph, or even a newspaper report that Henry Easton had returned to Guelph for a family visit, or at least found record of a border crossing from his homestead in Nebraska to his childhood home in Ontario.

But we didn't. And that leaves us, lacking such intel, still wondering whether this was the Henry identified by the enigmatic note on the back of a hundred year old photograph which ended up in an antique store in the foothills of northern California. 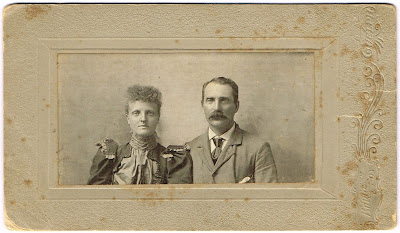 © Copyright 2011 – 2022 by Jacqi Stevens at 2:50:00 AM
Email ThisBlogThis!Share to TwitterShare to FacebookShare to Pinterest
Labels: Family Photos, Reed, Unidentified Faces