Had I mentioned that Nellie Reed, our original candidate for identity of the woman in our mystery photo, had a twin? (Made me take a look back at my own posts. The answer: yes.)

While we've since discarded the possibility that the woman in that photograph from Guelph, Ontario, might have been Nellie, we're about to see an echo of that history of twins in today's exploration of who our subject might have been. Not for the subject, this time, but for the person who might have been the "voice" behind the inscription we found on the reverse of the picture.

Yesterday, I wondered whether the photograph might have been passed along by a sibling of the subject's father. Remember, all we know about this young woman was that her father was named John Reed. We are presuming that he lived in the area around Guelph, since that was where the photograph was taken. Fortunately for us, there was a man named John Reed in that vicinity.

Yesterday, we explored whether the photo had been passed along in the hands of John's sister Frances, who not only had a son named Henry (one helpful criterion), but a daughter, Hattie, who eventually moved to northern California, where the photograph was found, over one hundred years later.

Unfortunately, some of the details led us to consider this a slim possibility for the identity of Henry. But before I leave that consideration, one more item popped up: Hattie had a twin. And her twin had moved to California, as well.

Hattie's twin was named Nettie. Both were born on September 29, 1878. Although they were born in Nebraska, far from our original location of Guelph, Ontario, they were of an age to be just a few years younger than either Lavinia or Mary Reed, the two possibilities we're now considering for the identity of the woman seated next to Henry in that photo I found in northern California.

Nettie's side of this twin story was that she married a man named David Frew. Originally from Illinois, David and his family moved to Nebraska by the time he was ten, leading him, a decade later, to the location where he met and married Nettie.

Sometime before the U.S. 1920 census, the Frew family moved to a warmer climate, settling in the Los Angeles area in southern California. Not until late in life did the couple move up to northern California—actually, to the county just south of me—possibly to follow one or more of their grown children.

Once again, that creates a possible line of inheritance located in the region where I eventually found the abandoned photograph. After all, that photo from the mid-1880s to mid-1890s had to find its way to northern California somehow.

The aspect of "voice"—detecting the point of view incorporated in the explanation written on the photo's reverse—also seems compelling. If, say, Nettie were writing that explanation to one of her children, she would, of course, refer to her brother simply as "Henry."

In attempting to identify the person sitting with her brother, so many years before—and especially if she were doing so in her own old age—she might have forgotten which of her cousins the woman might have been. Lavinia? Or Mary? After all, even if they were her contemporaries, she grew up in a place over one thousand miles removed from the old family home in Guelph.

On the other hand, it would have been easier for such a woman to remember the name John Reed. Though John resided in Guelph, himself, his son—also named Henry—eventually moved west, as well. That Henry, though, never crossed the border, settling first in Saskatchewan, and eventually in Medicine Hat, Alberta. In that latter location, Henry's father—the original John Reed—paid him a visit when the elder Reed took ill and died. Perhaps news of that family event, in 1943, would have been enough to keep his name fresh in the mind of whoever wrote the note on the back of the photograph I found in northern California.

Still, as we mentioned yesterday, the fact that Nettie's brother Henry lived and died in Nebraska interjects enough doubt into the twin version of this scenario that it outweighs the possibility of the picture having been passed down through either of this twin California branch of the family. We'll need to take a look at the other possibilities for Henry before we reach a final conclusion as to who the Henry in our mystery photograph was. And yes, such an exercise may prove exhaustive. 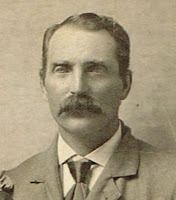