Thanks for the Hint


Over the years, in reviewing what people included on the reverse of their family photographs, I've been able to imagine the scenario surrounding the decision about what to write. In some cases, I can envision an elderly woman, desperately trying to pass along the details of her family history memories before she, herself, passes from the scene.

Sometimes, the subject's name might have been written, then crossed out and re-entered as something else. Other times, memory failed entirely and all that resulted on paper would be a description of a relationship, sans any names at all. Those descriptions could get convoluted by the time the task was completed.

For the photograph we are currently examining—that of a couple from Guelph, Ontario, which I found in an antique shop in northern California—I suspect we will be witnessing a re-enactment of such a scenario as described above. There isn't much to go by, as far as hints as to who our subjects might have been. I'm quite sure, in the midst of labeling the photograph, that someone forgot a name.

See for yourself what hints we have been provided. Here, in its entirety, is the reverse of the photograph. We'll see what can be found from all of this, tomorrow. 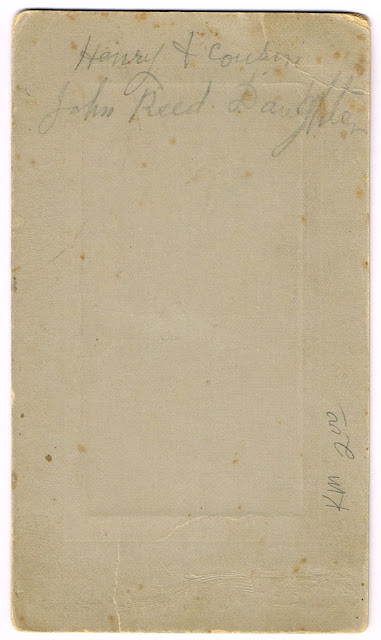 Above: Reverse of photograph from Burgess & Son studio in Guelph, Ontario. Photograph found in antique store in Jackson, California; currently in possession of author until claimed by a descendant of this family.