If it weren't for the fact that the names of the couple featured in an old photograph I found were so neatly inscribed on the back, my latest orphan photo project might not have seemed so promising. To start with, the couple's surname was Hopkins, a fairly common name. In addition, the location of the photography studio where they sat for their likeness, over one hundred years ago, was nearly obliterated from the frame by some unfortunately-placed water stains.

Still, it seems likely that the imprint for the studio said "Louisville, Ky." for the location—of course, I could have seen that wrong—and the full names given included the maiden name of the woman. What more could a researcher ask?

So today, we get to meet William Bernard Hopkins and his wife—oh, help me with this one, since the handwriting slipped a bit on her extra long name—Katy Seegar (Siegar?) Smith-Allen.

At least, I presume that is William's wife—if Kate is one and the same as Katy. I've seen people do the strangest thing with the photographs they later attempt to label for benefit of younger family members. Of course, at this point, with as little as we know about them, these could have been brother and sister. Assumptions can be very misleading, but otherwise, how would we be able to form a working hypothesis with which to launch our research?

Now that you've had the opportunity to meet the couple, we'll start tomorrow by pursuing any Louisville, Kentucky marriage records—or, for that matter, any other Hopkins records in that city—to see what we can find. 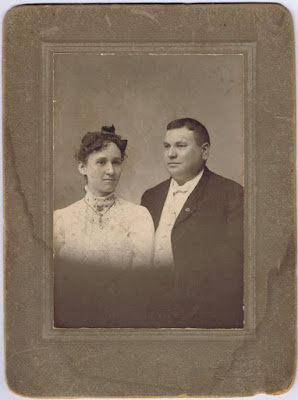 © Copyright 2011 – 2022 by Jacqi Stevens at 2:41:00 AM
Email ThisBlogThis!Share to TwitterShare to FacebookShare to Pinterest
Labels: Allen, Family Photos, Hopkins, Kentucky