"Seems like I always had the stomach ache," complained the youngest of the three girls posing in a post card from one hundred years ago. If we can trust the handwriting on the back of that post card to be listing the trio from left to right, it was likely Alta Barnes who wrote that note, much later in her life. Just from the looks of it, I'd say the girl on the right was the oldest of the three, and Alta's key confirms that would be Mollie.

Sure enough, from the 1920 census, we can see that the Barnes household of Silverdale township in Cowley County, Kansas, had a daughter Mollie who was born about 1902. Nellie, the next oldest Barnes daughter, would have been born around 1904. And little Alta arrived in 1909—her eleventh birthday was less than a month away when the 1920 census was taken in January.

Not only was there a significant age gap between Alta and her older sisters, but there was another span of almost seven years before the arrival of the next child. Helen Naomi Barnes was born in November of 1915, making me wonder whether the photograph of the three girls below might have been taken before their baby sister's arrival—or at least within the following year or two, before the toddler could photobomb the scene.

There was another child who had arrived in the family just after that 1920 census: Forrest and Clara Barnes' son, James. Making his appearance just two weeks after the enumerator stopped by the Barnes household, he not only missed being in this photograph, but also didn't gain himself an entry in the federal census for that decade.

Between those five Barnes children—Mollie, Nellie, Alta, Helen and James—I hoped to trace their descendants onward toward the present to reveal whatever connection there might have been to the antique shop in Jackson, California, where I found the photograph late last year.

That, as it's turning out to be, was too simplistic an expectation. 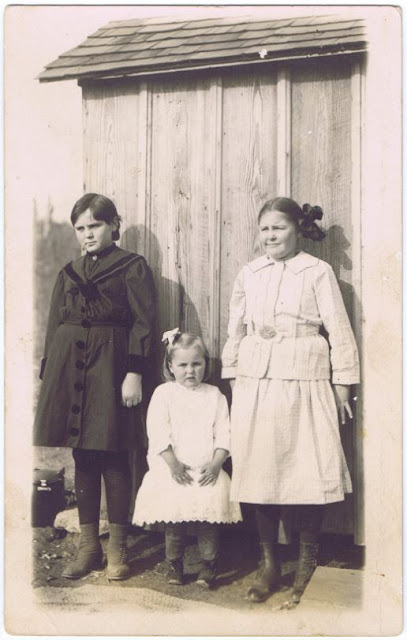