Alta Barnes must have been in a chatty mood when she wrote the explanation that accompanied her photograph—the one I found abandoned in an antique shop in Jackson, California. Besides naming the three sisters from Kansas—standing with Alta, there were Mollie and Nellie—and explaining her stomach woes, Alta, or perhaps someone else in the family, had more to say.

What I find to be an unusual remark to include in the label for a family picture was the addition someone—I'm not sure this is the same handwriting as that of the blue inked "stomach ache" comment—had scrawled diagonally across the card:


Aunt Nellie had just got over pneumonia fever. Her hair had fallen out and was growing back. 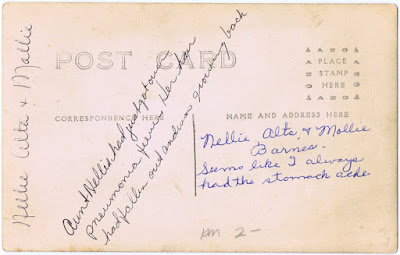 Sure enough, taking a closer look at the girl Alta had labeled as Nellie, you can see her hair was short—uncharacteristically so for that time period. I'm not sure what, exactly, "pneumonia fever" might have been, nor can I think of any fever so serious as to cause one's hair to fall out. Then again, I'm not a medical expert. Perhaps someone else will know—although, for reasons I explained yesterday, I doubt the malady had anything to do with the flu epidemic that occurred around 1918.

What would have helped even more, in puzzling over this added note, would be to know just who wrote that note. The handwriting wasn't quite the same as the blue inked lines which provided the girls' names. It could have been penned by another relative, or it could have just been a case of the same person's handwriting, many years later.

Whoever it was, either the person writing the note was a niece or nephew of Nellie, or the one being addressed was the niece or nephew. At any rate, we can probably rule out any children of Nellie from the list of possibilities, which is good for one main reason: I can't find any details about Nellie following her entry in the 1920 census.

© Copyright 2011 – 2022 by Jacqi Stevens at 2:51:00 AM
Email ThisBlogThis!Share to TwitterShare to FacebookShare to Pinterest
Labels: Barnes, California, Family Photos, Kansas