What I Learned from Lee


It's always a delight to meet another researcher who shares that passion for genealogy. It's even better when I discover that researcher will truly value the orphaned photograph now being sent on its way home.

In the process of meeting and talking with Lee from Minnesota—the family history researcher whose tree on Ancestry.com convinced me this was the right person to receive the photograph of William and Katie Hopkins—I learned a few things about that Hopkins couple that, with Lee's permission, I'd like to share.

The first time I encountered Lee's tree was through a hint on Ancestry. It was not for the ubiquitous shaky-leaf reminder to look at the other trees on the website, but it led me to a picture of William Hopkins in front of his drugstore.

Let me amend that: one of his drugstores. Thankfully, Lee had appended an explanation at Ancestry.com alongside the photograph (which you can see below):


William B. Hopkins owned drugstores in five states, but I believe this photo was taken in Kentucky around 1923. William B. Hopkins is the portly gentleman standing between the two women. I believe the younger woman on the left is his wife Katie Seeger Allen and the woman on the right is LeNorah (Dixon) Thornburg who became his second wife after Katie died in 1928. The young girl and older boy next to LeNorah are her Thornburg children, Ellen R. & John V.


Drugstores in five states? When I first saw that, I tried to do a search on the newspaper archive services I use, but nothing substantive came up, other than the Merck wedding mention that "Iggy" found for me a few days back. Now that Lee and I have connected, I wanted to ask a few more questions about the Hopkins businesses.

It was apparent from census records that William and Kate moved to locations other than Kate's home in Louisville. Could this have been due to William building his business? According to family members, William may also have had a store in Piqua, Ohio. In fact, at first, Lee was not sure whether the store photo was from Louisville or Piqua, but resolved the puzzle this way:


It pays to pay attention to all the "superfluous" details you can find in a photograph. Not to mention, I'm sure it paid—at least in William Hopkins' case—to have those ads put up on the side of his building. A clever businessman, indeed.

I picked up a few more ideas from Lee while we were discussing the Hopkins family—like where to look for the likely nexus that resulted in finding William and Kate Hopkins' photograph in California—which we'll take a look at tomorrow.

In the meantime, off that photograph goes, on its way home to Minnesota! 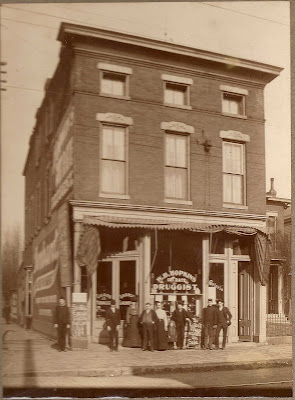 Above: Photograph, circa 1923, of William Bernard Hopkins' Drugstore in Louisville, Kentucky; photograph in the possession of Hopkins family member Lee in Minnesota; used by permission.
© Copyright 2011 – 2022 by Jacqi Stevens at 2:47:00 AM
Email ThisBlogThis!Share to TwitterShare to FacebookShare to Pinterest
Labels: Allen, Family Photos, Hopkins, Kentucky