Will the Real Thomas Kelly
Please Stand Up


Wearied with the prospect, in the midst of my research journey to Lafayette in Indiana, of trying to discern which one of several was the right John Kelly, I decided to switch tracks and pursue a different Kelly chase. After all, Ann Kelly (the target of this pursuit) had two other brothers I knew of: Mathew and Thomas.

The Tippecanoe County Historical Association's archives included several types of governmental records, so I tried my hand at checking for both brothers' names in a number of collections. The one collection that made sense to me—seeing that this Irish immigrant family was unlikely to own property or hold any possessions requiring a will in preparation for their inevitable departure—was the file documenting completion of "first papers," the Declaration of Intention signed at the start of the path towards naturalization.

While Mathew was not among the names of those in the immigration files for Tippecanoe County, Thomas was. In fact, there were two Thomas Kellys. And each one's paperwork contained details that might qualify him as member of the right Kelly family.

You knew this wasn't going to be easy.

The earlier of the two documents was filled out in 1852. This one, composed in a precise hand, showed this Thomas Kelly to be twenty five years of age, presumably at the point at which he affixed his mark at the bottom of the page. A little math work gives us an immigrant with a date of birth in 1827.

The serendipitous bonus to this particular form was that it included the detail of where this Thomas Kelly had been born. Not just stating that he came from Great Britain, this version included space for the applicant to go into further detail. Thomas obliged, stating he was born in the "County of Tyrone in Ireland."

This Thomas, as we found out from his declaration, sailed from Liverpool in 1846, landing in New York City in November. The Irish being reliable with their recall of dates as they are, it is no surprise to learn there wasn't any passenger record to be found for those precise parameters. However, according to the Castle Garden website, there was a twenty year old Thomas Kelly arriving in the United States from Liverpool in November, 1848. Perhaps that was close enough.

Of course, there was a second Thomas Kelly in Lafayette. Nothing is ever easy. This one completed his Declaration in 1868, giving as his age thirty one—if this less-legible hand can be deciphered correctly. This later version of the form unfortunately happened to omit the space for precise place of birth—given, this time, simple as "Kingdom of Great Britain"—but if this Irishman could be trusted to get his dates correct, he would have been born in 1837.

Looking at our known Kelly family's dates of birth—admittedly, correct only if we can rely on their statements to various census enumerators over the decades—the 1827 birth of the first Thomas would be a date fitting in nicely after James and Mary's son Mathew, and coinciding about the same time as the birth of their daughter Rose. But using the second Thomas Kelly's dates, the ones adding up to a birth in 1837, it would bring us farther down the family constellation to the point of—hey, wait a minute! That's when our Thomas was supposed to be born.

So, great: the flowery handwriting which was thoughtful enough to divulge the detail about being born in County Tyrone brings us a Thomas Kelly who is, likely, not our man. The chicken scratch, on the other hand, leads us straight to a young Thomas Kelly who, though not exactly the age he stated he was, arrived on the very day he indicated in his report at the Tippecanoe Circuit Court, back in 1868. His parents may not have thought to keep a record of the day of his birth, but someone had enough foresight to preserve the exact date when he arrived in New York harbor, so many years ago.

Now to determine whether this fourteen year old was traveling by himself, or whether he was with a group. Hopefully, that group will turn out to match the names of the rest of our Thomas' family. 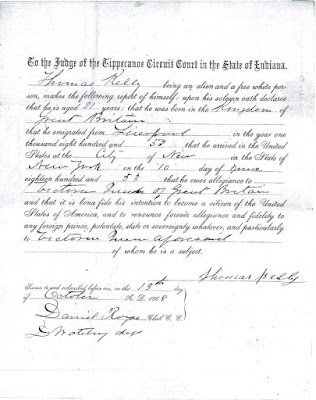