Reviewing What We Found


Research journeys can be fun. The family historian heads into the adventure, anticipating great finds—and then sinks into a momentary despair when realizing that time is closing in and the visit is coming to an end sooner than the hoped-for discoveries are occurring. That resultant last minute of flurried activity, thanks to the research after-burners kicking in, yields the hapless researcher a pile of papers with little memory of how—or why—they were put in the folder which got taken home.

But triumphant that return trip always manages to be. Trophies in hand—or, more correctly, in folders secreted in the carry-on luggage, too precious to risk loss at the hands of baggage handlers—we arrive home, deposit the prized records on top of our desks, and drop exhausted into bed.

Or something along that order.

Now, home and back to my senses, I look at that pile and wonder, "What is all this supposed to mean?" I try to remember what I looked for—and what I didn't think to look for. I look at all my scribbled notes and wonder what, in the rush, I was desperately trying to find before the archives' lights were turned out and the last recalcitrant researcher was kicked out the door upon closing.

Unfortunately, in all the whirlwind of desperate searching, the identity of that mystery John Kelly was dangling in the midst of the angst. I try to remember: did I seek any record of him in the immigration records from the local courthouse? If so, did I find any—but not get them copied? Or was he just impossible to find?

Questions that don't arrive home until much later than the researchers did need to be answered—and soon, before those faint memories vanish entirely. Though I haven't been home much more than a day, after unpacking and doing all the laundry, I had to pull out that research file and review my notes and discoveries. Especially regarding John Kelly, the man who popped up in Lafayette, Indiana, just before Ann Kelly's wedding.

So what do we know about this man who gave his "solemn oath" that Barnard Doyle and Ann Kelly were "of lawful age to marry without the consent of their parent or guardian"? I had never seen any mention of a John Kelly in Ann's family records. Why would he show up at this point—two days before the Doyle-Kelly marriage in Tippecanoe County, Indiana, on January 7, 1872?

Unfortunately, my scribbled notes on what was there at the genealogy center in Lafayette didn't provide much of a lead. There was the note about a John Kelly who married Johanna Kinney, listed as Marriage Record #7, page 83—but it came with no helpful additional information other than the date: November 2, 1856. Besides, in trying to uncover more on this couple after the fact, the Johanna Kelly I found in the Find A Grave listings linked to a husband named Michael. Not exactly what I had in mind.

I found another marriage record for a John Kelly—this time for a man who married someone named Mary Green. It was another 1856 marriage, but earlier than John and Johanna, on September 29, according to page 55 in that same volume of documents.

After exhausting the marriage records for everyone named John Kelly—or Kelley—I moved on to other resources. I found a John Kelly in Tippecanoe County who died in February of 1879. But then I found other records indicating he (or yet another man with the same name) had a brother named William—and that he might have been a son of Thomas Kelly, not James. Another note indicated he had moved to Quincy, Illinois.

There was another John Kelly, this time a railroad brakeman, who died in a work incident on May 22, 1876. And another one—this time sporting a middle initial plus an extra "e" in his surname—died on October 21, 1865. Fortunately, a side note in his otherwise uninformative obituary indicated he was a printer in Lafayette—an identity I was nevertheless unable to conjure up in the 1860 census.

An unusual report of a murder—of railroad employee John Kelly by a local man named Samuel Stevens (no relation of ours, as he turned out to be son of Isaac "Stephens")—unfortunately contained no date on the scanned news clipping, but the fact that he, like the other John Kelly, was a railroad worker makes me wonder.

But who am I kidding? There were likely dozens of railroad employees in Lafayette—or simply those passing through—with the name of John Kelly. There clearly needed to be a different approach to answering my research question. With less than an hour to go before closing at the genealogy center in Lafayette, I switched to searching the immigration records for any mention of Ann Kelly's brothers Mathew or Thomas. 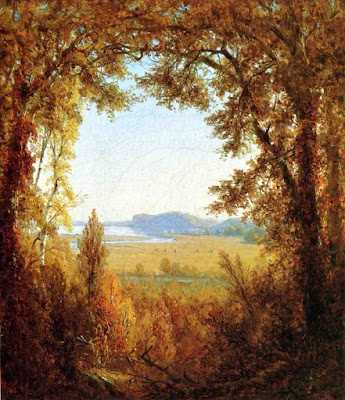 Above: "The North Side of Hook Mountain" by American landscape painter Sanford Robinson Gifford; courtesy Wikipedia; in the public domain.