It certainly helps, in trying to locate the identities of an ancestor's siblings, to know the names of their parents. In addition to the guidance provided by Mary Denehy Kelly's own obituary, we were able to move forward by locating her death certificate. This provided Mary's father's name as Philip Denehy—another stepping stone in our path towards that goal of pushing back another generation.

Provided with the name of Philip Denehy—one of its multiple spelling variations used over the years—I was then able to confirm Mary's one remaining brother, Cornelius, as well as double check the record for her sister Johanna. That brought us another step forward by advising us of their mother's name: Ellen. (It's still up for grabs whether her maiden name was Keefe or Buckler/Buckles.)

That, however, doesn't mean we have found every one of Mary's siblings. Some, of course, may have died somewhere else—in particular, a place where digitized death certificates are not yet accessible online. It would certainly help to find another way to locate a complete listing of Mary's siblings, mainly in a quest to link her back to the family's origin in Ireland—and, possibly, also figure out the paternity of Mary's daughter known as Margaret Sweeney.

There is one sure place to locate such information, but it comes with a caveat: no property to dispose of, no document providing instructions to the heirs.

I hadn't thought a poor Irish immigrant would have enough to dispose of, after a few years of eking out a living at the bottom of the labor pool in a new country, so I hadn't really thought to look for Philip. If it weren't for my curiosity over attempting to find Mary—and the mysterious Margaret—in a Fort Wayne household before her 1880 marriage to widower Timothy Kelly, I probably wouldn't have stumbled upon the document. As it was, it nearly slapped me in the face before I clicked through to take a look.

See how a faulty mindset can sway research success?

While I still can't locate Mary in the 1870 census in Indiana—forget that; I can't even find her in the 1880 census!—I now have a thorough listing of all the siblings of this woman alive at the point at which her father drew up his last will and testament. 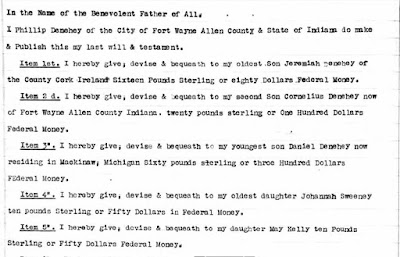 
With this initial excerpt from Philip Denehy's will, we now have the (presumably) full listing of all his children alive as of the date of this document—March 2, 1885. Of course, the will continues with other financial details—of which none mentions anything about his wife, Ellen, who died almost six months after Philip, in June of 1886. This excerpt, however, contains the essence of what is pertinent for our research purposes.

We are now provided with confirmation of four names of the children of Philip and Ellen: Cornelius, Daniel, Johanna and Mary—whose nickname was evidently "May."

But the real gift of the matter was the revelation of one child who had remained in Ireland: Philip's eldest son, Jeremiah. Finding Jeremiah, as it turns out, became the key to open up a few more doors in this quest to determine Mary's origin. And yet, even this part of the story requires a detour before it can be completed.


Above: Section of the March 2, 1885, will of Philip Denehy, filed in the Record of Wills, volume 11, page 38, at the Allen County Circuit Court in Indiana; image courtesy Ancestry.com.