If the daughter cannot lead us to the roots of her mother's family, can the mother tell us anything different?

Trying to learn much of anything about Margaret Sweeney didn't give us any leads—especially not that 1949 death certificate and its unhelpful "unknown" entries for the names of each of her parents.

Still, the presumption remains that Margaret—who showed up in the Kelly household about the same time as Mary Danahy, the one designated elsewhere as her mother—was somehow related to the Danahy family in Fort Wayne. Of course, this is all inferred by such details as the line in Mary's husband's obituary. And yet, the fact that Margaret didn't remain in the Kelly household with Mary after Timothy's passing might also provide some clues in the opposite direction. And discovering that Margaret Sweeney wasn't buried in the Sweeney family plot was another distressing indicator.

This brings up the question: would delving into Mary's past lead us to an explanation for how Margaret fit into the family? Furthermore—remembering the original puzzle that launched me on this ever-expanding quest in the first place—would examining Mary's history allow us to make further connections to explain the DNA matches with my husband that have surfaced recently?

Thankfully, the date of Mary's own passing was late enough to be documented by a more fully descriptive death certificate. Even better, those documents are now digitized and accessible online, whereas the first time I had examined this, years ago, they weren't.

So, holding my breath, I clicked through to see what Ancestry.com might now provide in terms of parents' names on Mary's death certificate.

And there it was—at least including Mary's father's name! While the box for her mother's name had the dreaded entry, "unknown," at least I had an indication that Mary's presumed maiden name was not off the track. A death certificate providing at least one real name. I was ecstatic!

Equipped with that, in the past, I used to try a search trick on FamilySearch.org, in which I did a blank search for the person himself or herself, but entered the names of the parents in the dialog boxes below. That way, I could force results for unknown people whose parents were the names I was seeking.

Apparently, that doesn't work quite like it used to. Or, at least, it didn't work for me this time.

No matter. What I can no longer put through its paces at FamilySearch, Ancestry.com makes up for. In particular, the search results at Ancestry have started providing hits for entries in which the parents' names are secondary info sets in another person's documents. This is an enormously helpful addition to their search parameters.

And so, using this new-found name for Mary's father, it wasn't long until I was getting search results for other children of Mary's parents—people I had no idea were even in existence, even within the residential limits of the city of Fort Wayne. Here were Mary's siblings!

Best in the lot was the entry for Mary's sister. Her name was Johanna, and at the time of her death, she was a widow, herself. Her married name? Sweeney. 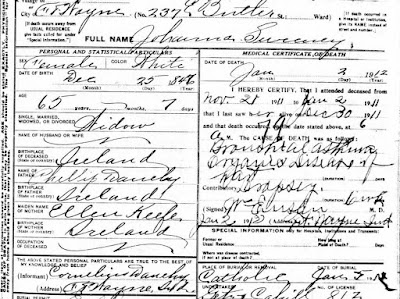 Above: Portion of Johanna Danehy Sweeney's 1912 death certificate indicating her parents' names as Philip Danehy and Ellen Keefe of Ireland; image courtesy of Ancestry.com.
© Copyright 2011 – 2021 by Jacqi Stevens at 2:46:00 AM