Up until this last season of searches, the only things I knew about the family of Mary, second wife of Timothy Kelly, were her maiden name, the connection to a daughter named Margaret, and the name of one—or possibly two—brothers. The maiden name arrived, courtesy of a transcription of the Allen County marriage records. The name of the brothers was thanks to conflicting reports in Mary's obituary, which was carried in two Fort Wayne newspapers, one of which obviously contained an error.

Going back and revisiting this search has turned up a number of supporting records which have helped clarify what I had uncovered a number of years ago. Let's go back and review what I already had, and see what new discoveries added to the data.

First, Mary's obituaries. These were almost identical, word for word with few exceptions. One of those exceptions was the listing of surviving siblings—in the plural—followed, however, by only one name given. Both obituaries ran on February 14, 1913. Here's the version from the Fort Wayne Journal Gazette, which named both siblings (albeit erring elsewhere by putting her place of birth as "Cook County").


Mrs. Mary Kelly, widow of the late Timothy Kelly and mother to Police Sergeant Richard Kelly, died at 9:45 o'clock last night at St. Joseph's hospital, where she had been a patient for the past two years, suffering from diabetes.
Born in Cook county, Ireland, Mrs. Kelly came to Fort Wayne with her parents when a young girl and spent the remainder of her life here. Her husband was for many years foreman of the Pennsylvania car shops. At her death Mrs. Kelly was aged 61 years, seven months and six days.
She was one of the original congregation of St. Patrick's Catholic church and was a member of the Rosary society and the Sacred Heart league.
Surviving are two sons, Richard and Andrew J. Kelly, of this city; two daughters, Mrs. Margaret Sweeney, of Fort Wayne, and Mrs. Frank Pence, of Toledo, and two brothers, Cornelius Danehy, of this city and Hugh Danehy, of California.
The exact time of the funeral services, which will be held from St. Patrick's Catholic church, will be announced later. Interment will be made in the Catholic cemetery.


The obituary following in the Fort Wayne Sentinel managed to include the date and time of the funeral, as well as the address of the deceased—which, considering we are pursuing someone with a name as common as Mary Kelly, thankfully matched up to other records for our Mary Kelly. The Sentinel also removed the name of Hugh Danehy as a sibling—something I may consider as well, as I haven't been able to find any other mention of this California-bound brother.

Now that death certificates for that time period in Indiana are included in the collections at Ancestry.com, it was fairly easy to locate records supporting that father's name I had found listed in Mary's own death certificate. Besides Mary's older sister Johanna, widow of Cornelius Sweeney, whom I mentioned yesterday, I also found the certificate for their brother, Cornelius Danehy.

Despite slight variations in the spelling of the surname, all confirmed the father's name to be Philip Danehy. And though Mary's indicated "unknown," Johanna's and Cornelius' reported their mother's given name to be Ellen. However, one gave Ellen's maiden name to be Keefe, while the other maintained it was Buckler (or possibly Buckles).

Even more helpful than that harvest of information was the simple will drawn up by Mary's father, Philip Danehy, during his final years in Fort Wayne, which, as we'll see tomorrow, filled in a few of the blanks in ways that couldn't possibly have been discovered otherwise—at least with the record sets currently available to us here. 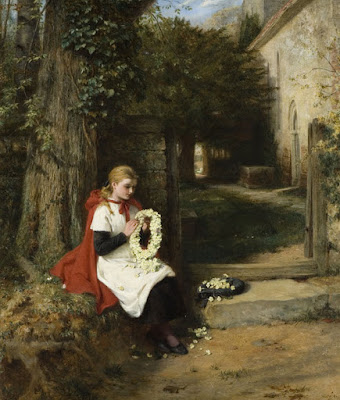 Above: "Not Forgotten," 1882 oil on canvas by Dublin-born artist George Bernard O'Neill; courtesy Wikipedia; in the public domain.