With several billiard halls in Battle Creek, Michigan, back in 1916—including at least six on Jefferson Avenue—I'm not sure why the one operated by Arthur B. Mitchell became the scene of the crime, but it did.

Being the proprietor of a billiard hall is likely an occupation bringing with it an element of the unexpected. After all, one never knows what disagreements might emerge from the smoky haze when men get testy about how the game is going.

Closing up the hall for the night, proprietor Arthur B. Mitchell likely headed home, thinking about much more mundane issues than what was about to happen at the shop he had left behind him.

Sometime late that March night, an explosion ripped his office safe wide open—at least enough for someone to lift the $422 stored inside it and make his getaway.

Right away, the sheriff—E.J. Mallory at the time—was on the case. Detective G. W. Colby and Sheriff's deputy F. M. Eddy determined their man, known as James Stewart, had headed toward Detroit. They tracked him there, only to find he had fled to Toledo, Ohio. When they thought they had caught up with him in Toledo, it was only to discover that Toledo police had indeed detained him for four hours—for some other reason, apparently—then let him go.

There were a couple other aggravating factors about this pursuit of the suspect. For one thing, the man they were seeking was likely not a man named James Stewart. Although James Stewart was the alias he had used, the man had also been known as James Gordon. To complicate matters—as was discovered over the next three months—he had also been called James Andrews and James Hogue.

The other challenge was where to look for this fugitive next. After that brief detention by the Toledo police, he was nowhere to be found. Not in Ohio. Not in Michigan. Not anywhere else in the region.

The fact of the matter was, this was no one named James at all—not Stewart, not Gordon, not Andrews. His name was actually John Hogue. And he had just skipped the country. 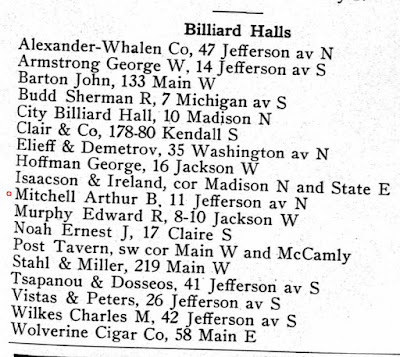 Above: R. L. Polk and Company city directory for Battle Creek, Michigan, showing listing of billiard halls in 1915, with Arthur B. Mitchell's business about halfway down the list; courtesy Ancestry.com.

© Copyright 2011 – 2022 by Jacqi Stevens at 2:42:00 AM
Email ThisBlogThis!Share to TwitterShare to FacebookShare to Pinterest
Labels: Hogue, Law Enforcement, Outlaws