Genealogists sometimes find themselves grumbling when they discover the ancestor they're seeking may have been known by more than one name.

Think, then, of the task facing law enforcement officials in no less than six cities across the United States in seeking to apprehend the man who was known as James Stewart. That man came with at least four other aliases—and that was just the intel gleaned from his handiwork during the year of 1916.

After James Stewart blew open the safe at Arthur B. Mitchell's Billiard Hall in Battle Creek, Michigan, that March, his trail led officers to both Detroit and Toledo. With communication devices one hundred years ago much more limited than our instantaneous connections today, this was not an easy process to track Stewart's whereabouts. The effort to catch up with Stewart in Toledo—just after his release from detention by city police there—may have been a process taking days. Maybe even weeks. No wonder they lost his trail.

Though Stewart did, eventually, feel the need to skip the country—an astute conclusion reached by a fugitive sought by a half dozen law enforcement agencies—he didn't leave right away. It turned out that at least one of the law enforcement agencies hot in pursuit was the police department of Madison, Wisconsin. They didn't even realize they wanted him until two months after his escapade in Battle Creek.

And for good reason: on the night of May 7, 1916, Stewart found his way into the Orpheum Theater in Madison, broke into the box office, slid the small, movable safe into the coat closet to muffle the sound, blew it open, lifted its contents—one thousand dollars—and made his getaway. Nobody noticed anything was amiss until the next morning.

After that incident, wanted posters described the criminal as an "inveterate cigaret smoker," a gambler and "a dope fiend." Notice was posted to every law enforcement agency in the county and surrounding area. James Stewart's "Bertillon Views"—the mug shots from the scientific identification system developed by French policeman Alphonse Bertillon—were even published in the Madison newspaper.

All to no avail. The next time there was any mention of James Stewart was when he surfaced in Canada. And that was only because he had been arrested in Winnipeg, Manitoba—but not until the middle of January in the following year. 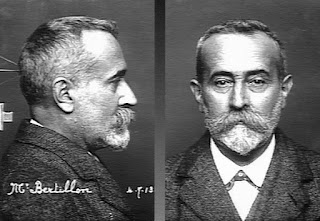