Trouble on the Matrilineal Line


Though there hasn't been much sharing of specific family history reports on A Family Tapestry lately, that doesn't mean I haven't been churning through pages upon pages of records lately. On the contrary, I have, despite not sharing much of what I've been finding. Perhaps it's just that some interesting stories are more equal than others. Or perhaps the silence has been designed to spare you from enduring some genealogical sausage-making.

However, just the other day, I ran across a document which may have turned all that around. Though not on my direct line, it's a story worth a pause to consider.

When I first pulled up the document—it was a simple border crossing report found on Ancestry.com—nothing of note caught my eye. Actually, the digitized image was blurry, making it hard to take it all in. I had to slow down and decipher the entry in each box on the card.

I had been working on my matrilineal line, cranking out some "reverse genealogy" in hopes of finding that nexus with my DNA exact-match mystery cousin. Despite the mtDNA test implying I should look solely at those women descended from my mother's-mother's-mother's line, it just irked me to leave off the task of a generation's documentation without also attending to all the other children in a family.

Still, no connection with my mystery cousin's line. So I pushed back yet another generation in the matrilineal line—to Elizabeth Lewis—to repeat the process. Then to her mother, Jane Strother, and to her mother, Margaret Watts.

Then, once again, for each woman on that matrilineal line, the long slide back down to the present.

It was there, tracing the children of Margaret Watts, wife of William Strother, that I found one line's descendant with this unusual border crossing report.

The report was concerning a man named John Hogue. He had popped up on my Ancestry.com tree as a possible hint for the man I was researching—John Syme Hogue. Not entirely sure this man's record fit my John Syme Hogue's profile—he was, after all, a descendant of an old Virginia family which included the nation's fourth Chief Justice of the Supreme Court, John Marshall—I wanted to study this bit of evidence carefully. After all, while there might not be that many men named John Syme Hogue, there were doubtless many more claiming the much simpler form, John Hogue.

The card—an immigration report—was drawn up on February 14, 1926, upon the man's entry into the United States from Canada at Detroit. Although the man clearly was reported to have been born in the United States—in Charleston, West Virginia—the card seemed to have dealt with him as if he were not a native. The form asked if he had ever been in the U.S.—yes, of course—then, when and where. Seeing that this forty year old man had been in Charleston, West Virginia, from 1885 through 1914, would seem enough to indicate he was a resident of that country, likely from birth.

But forms never assume anything.

Despite this man's claim to have been born and raised in West Virginia, when it came to the question, "Name and address of nearest relative," the answer provided was, "Do not know where relatives."

What was this? A case of amnesia? Why would this traveling man not even recall his own family members?

Apparently, from about 1914 to the 1926 date when this card was completed, this man had been a resident of Canada, with a last known address in—I found this out later, since the handwriting was impossible to read—Kingston, Ontario.

It was lumpy details like these that made me start looking more closely at all the other blurry answers on the immigration card. The man was headed for Battle Creek, Michigan, for instance—conveniently, not far from Detroit—but when it came to the entry for "Going to join relative or friend," the response was "Going to Battle Creek in custody of Sheriff." The entry for "occupation" read "Convict." His purpose for coming? "Stand trial."

So, this John Hogue had been extradited from Kingston, Ontario, to Battle Creek, Michigan.

Of course, my first question had to be, "Is this my John Hogue?" But then, no matter who he was, I couldn't resist it; I had to learn the back story. You know my next question was going to be: Why? 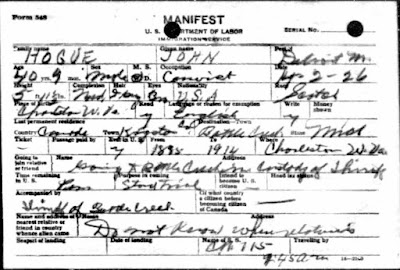 Above: Manifest of the United States Department of Labor Immigration Service card for John Hogue, courtesy of Ancestry.com.

Email ThisBlogThis!Share to TwitterShare to FacebookShare to Pinterest
Labels: On the Move, Ontario Canada, Strother, Watts