In wondering what might have become of our mystery Margaret Tully—born in Ballina, County Tipperary, in 1844, and last seen at home at the time of the Canada West census in 1861—it vaguely crossed my mind that perhaps understanding how people immigrated to Canada might help sort out this puzzle. After all, immigration is nothing more than people moving from one place to another. Over vast distances, granted, but moving somewhere else. And that, often, was accommodated in groups. You didn't, for instance, see any brave sorts, back at the height of the Irish famine, bragging about solo trips sailing across the northern Atlantic. Most people headed across the ocean with people they already knew. Once they arrived in their New World, they tended to settle with those same people they knew.

Not that this was the first time I had considered this issue. Actually, our family had gone through the throes of tackling it through the summer months, as our daughter was designing a research proposal for a study in Canada on immigrants' remittances to their homeland—a useful pursuit for an inquisitive economics student of Irish immigrant descent.

As it turned out, upon querying a professor in Ontario for advice on her research design, it would be near impossible for her to zero in on her immigrant population; the bulk of the source documents she would have needed for her data is no longer existent—something we in the genealogical community have been bemoaning for decades.

And yet, she uncovered some pointers that could still be useful for our present brick wall quandary. First, that some Irish may have come over to Canada in large groups—not just their own families, but possibly immigrant groups sharing the same home town. Some of them might have been spearheaded by local leaders whose task it was to assemble a shipload of people for a given voyage. Some may have been organized for a specific purpose—to settle and farm a large tract of agricultural land, or to take on a specific project like building canals or laying down railroad tracks. In cases like these, my hunch of trying to find where Margaret went by following not only her siblings but her larger community would still ring true.

Then, the corollary would be that, upon arrival, these immigrants would tend to cluster in self-reinforcing communities, rather than freely intermingling with the population at large. Although, in the case of the Irish, they would not be as hampered by language barriers as other immigrants to the New World, our newly-arrived ancestors would likely seek out familiar signposts of what they considered important back home. One pillar of the traditional would likely be symbolized by their Church—and seeing the early establishment of the Catholic Church in Paris, the town where our Tully family settled, rings true there. In a land more hospitable to Protestant than Catholic traditions, there may not have been as many choices for places to settle in Canada for our Catholic Irish ancestors; this establishment would be important for an immigrant community.

It was for this reason that, in considering the suggestion that maybe Margaret Tully had married and moved to nearby Saint Columban in Huron County, Ontario, I realized there might be more to such a suggestion. Apparently, in the area was an "Irishtown" settlement—a telltale sign that, en masse, the Irish immigrants had felt a welcome bidding them head to Huron County.

Whether this was where our Margaret Tully ended up or not, it is this sort of background information that might help determine that immigrant flow—first from County Tipperary to Brant County in Ontario, and then onward to wherever the family, in all its branches, ended up. While it is possible each sibling went his own separate way, that generation-long tendency to stick with the extended family or larger group may still have held sway. It would help to spend some time familiarizing ourselves with the currents that pulled these Irish families across the ocean—and see where it would send them, after arrival in Canada. We'll take a further peek at what can be gleaned on this, tomorrow. 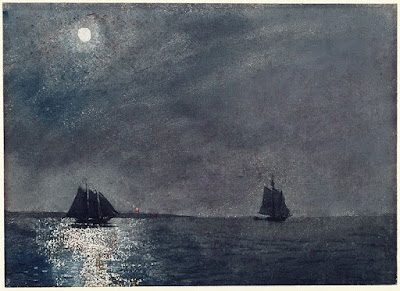 Above: "Eastern Point Light," 1880 watercolor over graphite on wove paper by American landscape painter, Winslow Homer; courtesy Wikipedia; in the public domain.
© Copyright 2011 – 2021 by Jacqi Stevens at 2:49:00 AM

Email ThisBlogThis!Share to TwitterShare to FacebookShare to Pinterest
Labels: On the Move, Ontario Canada, Tully