Not Time to Cut to The Chase


An action-starved audience, stuck in the midst of the plot lull where the behind-the-scenes details get filled in, might be thinking, "Cut to the chase!" They want action, and they want it now.

For those of us stuck in the shadow of a genealogical brick wall, it would most certainly not be advisable, now, to cut to the chase. The resultant splat might not be edifying—neither for us as the researchers, nor for our audience, those learning from our discoveries.

Well, maybe they would learn one thing: it pays to take our time when considering just what it is that has kept us at bay in our research progress.

That's what I hoped to achieve when, yesterday, I decided to take a detour to research some general information on Irish immigration to Canada during and just after the Great Famine. Since I am totally stuck on uncovering documentation to show what became of Margaret Tully, young sister of my husband's great grandfather, I am hoping this tactic will help illuminate some details that might otherwise be overlooked.

Before starting, though, a recap: I don't yet even have documentation showing the Tully family's exit from their home in Ballina, County Tipperary, just above the River Shannon to the east of Limerick. I don't suppose I'll ever uncover any such passenger lists or other records. The best I can estimate is that the Tully family arrived in Canada West in time for Margaret's mother—also a Margaret—to give birth to the Tullys' last child, William, almost two years before the 1851 census was taken.

Therein lies part of the problem. The impetus behind some collections of passenger records was the fact that the vessel would be leaving a port in one country and eventually sailing into harbor in an entirely different country. Not so for ships of the British Empire—of which was once said, "The sun never sets"—for the route between Ireland and Canada never took the King's subjects across international borders. That held true for many years after the Tullys' arrival, circa 1850, until the 1867 Canadian Confederation. Yet, even after that point, because of Canada's continued status as a semi-autonomous part of the British Empire, there was no need to seek naturalization papers in Canada for immigrants from other parts of the United Kingdom, thus eliminating that other typical route for genealogical searches.

By the time the 1851 census was taken—likely, in 1852 in Canada West—the Tully family lived in Brant County in a small town called Paris. They were also there for the subsequent census in 1861.

But then they disappeared. At least, that's how it appeared on the paper trail. There was no sign of them in the 1871 enumeration for Brant County.

Of course, for our direct line, we know the rest of the story—further immigration to Chicago in the United States—by virtue of being able to discern it in retrospect. Where on earth our possible second cousins might be—descendants of great grandfather John Tully's sister Margaret—we have, at this point, no way of knowing.

Digging into historic narratives studying this general immigration flow helped sketch in the picture. I learned, right off the bat, that Irish arrivals in Canada did not commence with the tragic conditions the Irish were seeking to escape during the famine. The Irish had been arriving in significant numbers much earlier than that era. Mostly, in Ontario, those numbers were comprised of Protestant Irish from the northern part of the island, but following the resolution of the War of 1812, a growing portion of Irish immigrants were Catholic. Most of these came as laborers for transportation projects such as building roads, canals, or, later, railroads. Others came to work in the lumber industry.

With the increase in immigration as early as 1830, the main port of entry—Québec on the Saint Lawrence River—saw the annual arrival of an average of thirty thousand immigrants, two thirds of whom came from Ireland. Partly, this was owing to immigration restrictions imposed in the United States causing prohibitive increases in fares for those wishing to land at American ports. Thus, the more destitute—and likely more susceptible to disease among them—had no recourse but to choose the less expensive option and sail to Canada.

This, unfortunately, coincided with a time when major cholera and smallpox epidemics were sweeping through Europe. Concerned, the Canadian government established a quarantine station on an island near the entry port of Québec—Grosse Île—in order to control the spread of these serious, communicable diseases.

By the peak of Irish immigration at the time of the famine, the Grosse Île Quarantine station was so overburdened that dozens of ships lined up to await their mandatory landing and inspection. This unfortunately created the century's perfect storm and national tragedy where almost five thousand Irish immigrants died, thus conjuring up the specter of the "coffin ships." The largest Irish burial ground outside the island of Ireland can be found on Grosse Île.

For those fortunate enough to survive the hardship of transatlantic travel conditions of the mid nineteenth century, the dream was of picking up life in a new world. While many Irish had left behind life in agrarian settings, most of the "Famine Irish" coming to Canada tended to settle in more urbanized areas. Often, they were seen as a source of "cheap labour that helped fuel the economic expansion of the 1850s and 1860s." This is exactly the scenario painted for our Tully family.

Though there were some earlier offers of land for Irish immigrants—the Petersborough settlement being an example from the 1820s—it wasn't until after 1856 that Irish immigration was driven by such items as special land grants for Irish settlements, such as ones in North Hastings County.

Yet, the point at which the Tullys most likely arrived in Brant County was a time frame sandwiched in between these two points. Not of the generation able to take up Peter Robinson's offer of land at the settlement which eventually bore his name, nor considering emigration from Ireland at the time of the later offers of land grants, the Tully family's arrival coincided with that of the segment of the immigrant population most likely to become the bulk of a different type of trend: the trend of continuing that immigration onward, yet again.

As noted in an article, "Irish Canadians," in the online Canadian Encyclopedia, the immigrant Irish were not well received, seen with resentment on account of their impoverished lifestyle, and soon felt the push to move onward. That "onward" soon became obvious: take the inland route across the international border and settle in the United States. By the 1860s, this number of Irish exiting Canada had escalated to the thousands; the Tullys were not traveling alone. Some of this may have occurred due to economic downturns in Ontario coupled with mining booms and opportunities for new land in the western United States and more distant provinces of Canada. We witnessed this draw in the decision made by the Ryan family—Margaret's older sister Johanna and brother in law Edward Ryan—to move to Dakota territory in the 1870s, and then to Winnipeg by the turn of the century.

Still, this broad sweep of immigration history helped us understand what propelled the Tullys out of their homeland in Ireland, what drew them to land in Canada near rivers and railroads, and what eventually convinced each of the grown Tully children to take their young families to better prospects in U.S. cities or territorial land out west. But it still doesn't help us figure out what might have become of Margaret, herself.

However, stumbling upon an envelope with a little sliver of a newspaper clipping enclosed while riffling through old files yesterday may have been the fortuitous discovery that will redirect our search tomorrow. 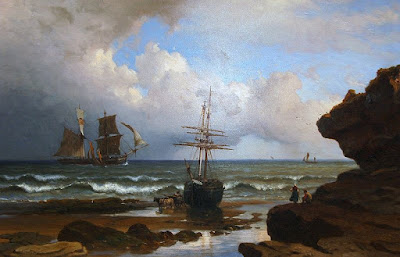 Above: painting by Alexandre Thomas Francia; courtesy Wikipedia photographer GdML under the Creative Commons Attribution-Share Alike 3.0 Unported license; artwork in the public domain.
© Copyright 2011 – 2021 by Jacqi Stevens at 2:48:00 AM