Still More Out There Than I Know


It may seem like I'm still struggling—no, contorting myself—to develop an explanation of what became of the Tully family after their last appearance in the 1861 Canadian census. In particular, I'm seeking signs of the whereabouts of one particular Tully: the younger of the two daughters of Denis and Margaret Flannery Tully, who seems to have simply disappeared. There is no trace of what became of her.

Taking the high road on this journey of discovery—informing myself of the background story of immigration from Ireland to Canada—has been helpful in a general way. But it still hasn't answered my question.

I did, in the midst of researching yesterday's post, run across a good many other links that will be of help, and I'll post them as they become pertinent to our exploration in the next few days.

Better than that, though, was stumbling across a small, yellowed envelope containing two tiny newspaper clippings.

Someone in the Tully family—likely John Tully's wife Catherine, who would have been Margaret's sister-in-law, if she ever met her—had snipped these sad announcements from a newspaper and tucked them away among other personal papers. When the whole set of Catherine's papers were passed along to her daughter Agnes, then to Agnes' son Ed, and then to me, I eventually uncovered them—then totally forgot that I had found them. Then recalled them again, almost exactly one year ago. And forgot them again.

Now out of their concealing envelope once again, perhaps they'll help to fill in a few more blanks. If nothing else, the one I'm sharing today will serve to encourage us that, yes, there are other Tully descendants out there—inexplicably, though, for I still have no idea just how they connect to the rest of the family. But they're there.

The clipping I'll share tomorrow will provide one additional hint to encourage us onward in this search.

As to the rest of the details—what publications the clippings were taken from and who they actually refer to—I still need to follow through and find a different source for the information. It's not lost upon me that, had I thought to capture the image of the death certificate as it was provided the first time I researched this name, I might still have it; as it is, those images were retracted from the database of the FamilySearch collection where I first found them. Moments such as these provide ample instigation for kicking one's self.

Of course, for lack of a parent's name upon which to pin this unfortunate deceased young lady's withered twig on the Tully family tree, I had left it—and all the associated research—just hanging out there in the ether.

I still don't know how to plug this person's name into the family tree. But what inspires me to find a way is the possibility that it will point me to one of those other missing branches in the tree. As I discovered last year, upon contemplating who that other John Tully might have been, down the street from our John Tully in that 1851 Canadian census, is that there are a few other Tully relatives I've not even researched entirely. I'm sure there are some out there of which I'm not even aware, at all.

Maybe the young Julia Tully, though captured by consumption at a young nineteen years of age, might still be able to lead us to her family. 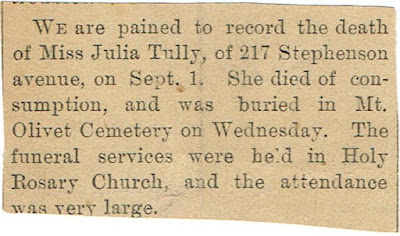 We are pained to record the death of Miss Julia Tully, of 217 Stephenson avenue, on Sept. 1. She died of consumption, and was buried in Mt. Olivet Cemetery on Wednesday. The funeral services were held in Holy Rosary Church, and the attendance was very large.