Need to Look This Stuff Up


It's personal confession time. And won't my Canadian friends laugh at me, now!

For some reason, when reading those old-fashioned news items which flagged the editors of newspapers from far-flung locations—you know, like John Tully's obituary instructions, "Ontario and Manitoba papers please copy"—I had always presumed that Ontario was the city in which some Tully relatives once lived.

I knew that. But somewhere in the back of my mind is a file folder for misinformation, and this particular misinformed thought had taken up residence there.

It's an honest mistake. After all, I'm not Canadian, myself. The only parts of Canada I've visited have been in the westernmost reaches—cities like Vancouver and Victoria.

So it took rediscovering that tiny newspaper clipping I told you about the other day to snap me back into reality with one simple line of detail: in this death notice, the obligatory request to "please copy" specified not the provinces in Canada, but the actual cities.

The undated obituary was for Daisy, the eldest child of John and Catherine Malloy Tully, who died in 1877. What is useful about rediscovering this clipping is that, in our current quest to determine what might have become of her aunt Margaret, this young Margaret's funeral notice leads us to the very town in Ontario where any remaining Canadian Tullys might still have been living. And pinpoint the date at which they were still there.

The actual town mentioned was a place called Seaforth. I had seen that town mentioned in other family papers, but once again, hadn't taken the time to look it up. Considering the unidentified family photos I had been perusing—all seeming to come from a studio in Hamilton—I had assumed Seaforth was located somewhere close to Hamilton.

On the contrary—as I finally do discover, once I get around to looking this stuff up—Seaforth was in the opposite direction from Hamilton, if looking at a map from the perspective of the Tullys' home in Paris. To put it another way, it was in the same direction—and in the same Huron County—as the Saint Columban cemetery Iggy was wondering about the other day. In fact, if you take a look at this map, courtesy Google Maps, of the red marker on the top left delineating Seaforth, Paris is on the opposite lower corner, near Brantford, just west of Hamilton (which couldn't fit on the map if enlarged to the point of showing both Seaforth and Saint Columban). Note, also, that the very next town, down the road from Seaforth and before you arrive at Dublin, is Saint Columban. 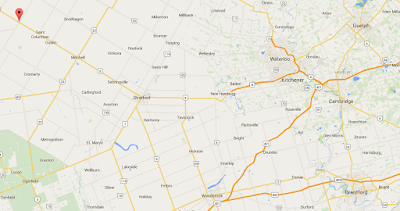 Of course, that means I've still got a lot of checking to do. It doesn't exactly mean I can welcome that other Margaret Tully into the family just yet. But it sure puts us in closer range than we had thought before. I'll be taking another look at census records for Seaforth, to see if perhaps any other recognizable family names had shown up there. Since Seaforth wasn't a city of significant size, I doubt it published a newspaper covering a wide region. Mentioning Seaforth in an obituary probably meant that there was family in that specific town. And since the deceased Margaret's mother Catherine Malloy Tully had grown up an only child, the only possibility for relatives might well have been on her father John Tully's side of the equation.