When the long-sought obituary finally materializes for the ancestor one is researching, the question uppermost in mind, of course, is: will the newspaper report include that coveted list of relatives?

In the case of research on Thomas Guinan of Winnipeg—and formerly of Ontario and North Dakota—the answer was, thankfully, yes.

I'm not sure I would like to be remembered as an "old-timer," but that is how Thomas Guinan was presented in the long write-up published on May 5, 1937—three days after his death. Headlining the article, plainly enough, "T. Guinan, Old-Timer of Winnipeg, Dies," the Winnipeg Free Press devoted a good portion of two columns to a review of the man's life accomplishments.

Small wonder. The paper characterized the man as a "prominent figure in the development of Winnipeg and the west in the early part of the century."

Thomas Guinan's age was given as eighty—right away providing a warning to remember that all newspaper reports are suspect, when it comes to pristine accuracy. An earlier article had indicated that he was born six years earlier. Typo?

Still, the overall picture provides a guide for retracing the steps of Thomas Guinan's personal history.


Born in Huron county, Ont., on Nov. 10, 1856, he spent his early days on a farm near the village of Blake in Stanley county. Educated in the public schools of Ontario, he remained in that province until the late seventies, when he moved with his parents to North Dakota, where his family was one of the early settlers in the Langdon district.

Some of the details of his business dealings as a young adult we have already stumbled upon, thanks to newspaper reports in North Dakota, where Thomas had settled with the rest of the Guinan family.


Mr. Guinan later went into the hotel business at St. Thomas, N.D., where he lived for many years. Beginning in 1896, he served four years in the North Dakota legislature.

Of course, the main focus of Thomas Guinan's obituary would be his years spent back in Canada. Many of these details we've already uncovered, as well, including his original settlement in the Elm Creek area and his later involvement in the real estate business, headquartered in Winnipeg, as president of the Red River Land & Loan Company.

Remembering the article I had found yesterday on the court case calling some of his real estate deals into question, I was interested to see how the newspaper—now in retrospect—would portray that rough stretch of the Guinan history. In the circumspect graciousness reserved for the eulogized, the Free Press said merely that he "was instrumental in bringing many settlers to the west" and that "the present suburb of St. James was largely developed" by the Guinan company. However, the paper couldn't resist the understated reminder that


Mr. Guinan was a Conservative in politics, and was a staunch supporter of the late R. P. Roblin during his long term of office as premier of Manitoba.

Coming to the statement that all genealogists live for, the Free Press reported that Thomas Guinan was

Other than omitting the actual name of his widow, Thomas' obituary turned out to do a fine job of orienting us to the Guinan family constellation. As if wishing to further confirm the connection, the paper went on to include a post-funeral report on May 6, 1937, which added the names of the pallbearers, including Dan "Rayan" and Pat Ryan, likely nephews of Thomas Guinan through his by-then-deceased sister, Annie and her husband, James Ryan.

Newspapers being newspapers, that this obituary might have been embellished is a risk we have to take in seeking more information on the man. The political hot water swirling around the one episode of Thomas Guinan's career, though in this article presented quite innocuously, may well have led to what the newspaper benignly mentioned as the time when


he retired from business during the Great War and since then has lived quietly with his family....

However, dates and details of political analysis aside, the Guinan obituary provides us a guide through the underpinnings of Thomas' personal life, for which I am grateful. Between this tedious newspaper search, involving both the publications in North Dakota and in Winnipeg, and the outline of his family constellation, despite some discrepancies in details, I was finally able to locate a possible census record for the intact family before they left Ontario for North Dakota.

Not exactly in the "Stanley county" residence identified by the Free Press—and indexed under a spelling off by one critical letter—this 1871 census entry for the "Gainan" family in the Stanley district, still in Huron County, finally yielded the list of family members I had suspected would be the way it was. With Thomas at a promising fourteen years of age at that point, the list included the two brothers I had wondered about—Will and Joseph—as well as sister Annie and baby brother Hugh, likely named after the "Uncle Hugh Quigley" I had seen mentioned in various newspaper entries. Eight year old Margaret became the "Maggie" Guinan who later was wed to John Franklin in North Dakota. And Mary most likely later became Mrs. Falconer, mother of the unfortunate ten year old Stella, returned to her childhood home in North Dakota for burial. 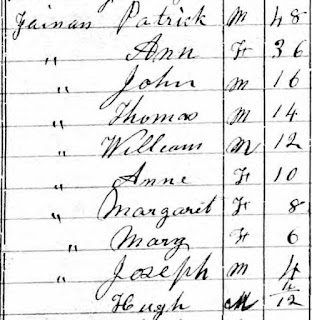 Above: The "Gainan" family—likely the Guinan family—from the 1871 Canadian census for the Province of Ontario, Stanley township in Huron County. Image courtesy Ancestry.com.
© Copyright 2011 – 2022 by Jacqi Stevens at 2:50:00 AM
Email ThisBlogThis!Share to TwitterShare to FacebookShare to Pinterest
Labels: Guinan, Manitoba Canada, Newspaper Clippings, North Dakota, Ryan, The Political Landscape