It was not lost upon me, in going to my most recent genealogical conference—the Southern California Genealogical Society's Jamboree—that the vast majority of those present were women. What I saw at Jamboree was not an aberration; most meetings I attend on the topic of genealogy seem to be more popular with the women than with the men.

And yet, it was not lost upon me, as I finished up my research on the Ryan and Guinan families of Winnipeg, Manitoba, that the very record that informed my search was originally noted, not by a mother in the Ryan family, but by a father. Joe Ryan—that award-winning manager of three different professional football teams in Canada—took the time to write what he knew of the Ryan family to pass along to his own son. That's the only way I knew of Joe. And Joe's father, James. And, eventually, his father, Edward—the one who proposed to young Irish immigrant, Johanna Tully, sister of my husband's great-grandfather, John.

The Ryans are not the only family benefiting from sons passing along the family history from fathers. I, too, benefit much from both my brother and a cousin—both of whom, due to the difference in our ages, were able to meet relatives who were long gone by the time of my own arrival in the family. I've relied heavily on both these men's notes and recollections—and, in the case of my cousin, photographs as well—in starting my own research journey.

Perhaps you have such people in your family, as well—men who take care to preserve the stories of the generations who've gone before them. If so, in addition to all the traditions of today's Father's Day celebration, please be sure to express to them your gratitude for their willingness to go against the tide and be the one who became the keeper of the family stories and traditions.

After all, if it weren't for people like them, our family stories would vanish from memory within the passing of one brief generation. 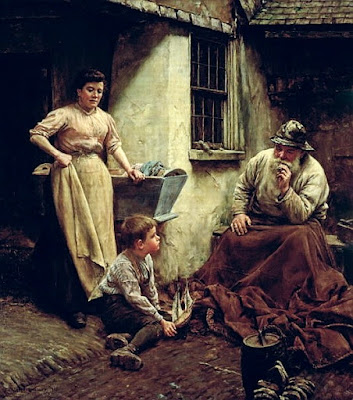 Above: "A Chip Off the Old Block," oil on canvas, 1905, by English painter and founder of the Newlyn School of plein air artists, Walter Langley; courtesy Wikipedia; in the public domain.
© Copyright 2011 – 2022 by Jacqi Stevens at 2:52:00 AM
Email ThisBlogThis!Share to TwitterShare to FacebookShare to Pinterest
Labels: Holidays and Genealogy