When Business is Booming


Call me crazy, but I decided one way to determine which of the many Guinans settling in the Grand Forks area of the Dakota Territory were related to our Ryans was to do a universal search of the surname in the historic newspapers collection at GenealogyBank.com. We do, after all, have the technology. Why not?

It took quite a while to sift through the 196 hits received from such a query. It will take even longer to sort out which Guinan was related to whom. Precious few of those news reports coupled the name Guinan with the surname Ryan, actually. But since at least two Guinans were in-laws of our Ryan line, I have a lot to learn by examining the comings and goings of the extended family.

While I'm still mulling over all the listings, don't think I'll just vacate this blog space. Oh, no. There are too many useful tidbits to share. So I may as well start with a few, today.

One of my main questions was, "What made the Ryan family decide, after emigrating from Ontario to the Dakota Territory, to return to Canada?"

I always had the hunch that Edward and Johanna Ryan did not make their cross-country move alone. Besides taking their adult children with them—well, at least three of them for certain—there were others whose names seemed to crop up, not only in North Dakota, but later, after their return to western Canada. Among those names were several of the extended Guinan family.

Evidently, some of the Guinans were—at least for a while—successful businessmen. It was quite entertaining, reading through the sometimes snarky editorial comments tossed into the local columns of the Grand Forks Daily Herald. Of course, there were many ads placed for the business of one Guinan relative—Thomas—but in addition to that, I gleaned enough to get a sense of life in early 1900s North Dakota. More importantly, I also got a glimpse at who was lobbying to move northward—and why.


Thompson & Guinan have received a new tonophone, or in plain English one of those new fangled pianos that run by electricity and goes without fingers.

While Thomas Guinan was part of the extended family that still remained in North Dakota after the turn of the century, his brother Joseph Guinan—at least, I think he's his brother—had evidently already made the move northward. Under the headline, "Grabbing the Coin," in the November 18, 1906 edition of the Daily Herald, the report was made,


Joseph Guinan, who has been in Sasktoon, [sic] N. W. T., for some time, writes to friends in this city that he is making lots of money in the hotel business at that place. He says times are booming and he likes the country.

By February 10, 1911, another Guinan brother had chimed in, according to the Grand Forks newspaper.


Wm. Guinan of Saskatoon, a brother of Joe Guinan, a former business man of this city, and now also located at Saskatoon, is a visitor in the city, and will leave this morning for his Canadian home. Mr. Guinan reports that a large number of people in eastern and central Canada will move to the Peace River country in the spring, and that the reports of the good climate and soil in that part of Canada are not exaggerated.

Thinking of how blustery the weather could be in North Dakota, I have to wonder how "not exaggerated" the Guinan report of good climate farther north at the Peace River valley might have been. Somehow, it makes me wonder if the Guinans were single-handedly launching a public relations campaign to urge their friends, associates, and neighbors to all vacate Grand Forks and join them in moving to Canada. 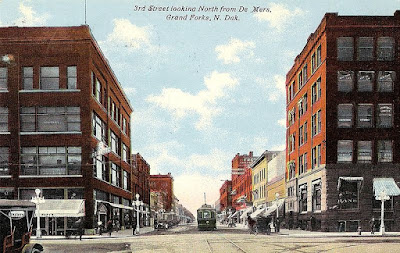 Above: Vintage postcard of downtown Grand Forks, North Dakota, circa 1912, within the decade after many of the Guinan family had left the area for Canada. Courtesy Wikipedia; in the public domain.
© Copyright 2011 – 2022 by Jacqi Stevens at 2:43:00 AM
Email ThisBlogThis!Share to TwitterShare to FacebookShare to Pinterest
Labels: Guinan, Newspaper Clippings, North Dakota, Ryan, Saskatchewan