Alright, then: the death certificate that assured me that Sarah A. Stinebaugh's maiden name was Kinslow led me to the brick wall roadblock of a "burned" county: Dallas County, Missouri.

All I had was information gleaned from the census records of her married years: as a young mother in 1860 in Missouri, and much later in 1880, when the family moved to Texas. (For whatever reason, try as I might, I could not locate the family in the 1870 census—either in Missouri or Texas—though Sarah's husband's parents and some siblings were easily located in their new Texas home by 1870.)

What I could determine about this Sarah Stinebaugh was that she was born about 1839, and that she was born in Kentucky. Both the 1860 census and the 1880 census consistently substantiated those two bits of information. A later look at Sarah's headstone confirmed that year of birth.

The next task, of course, would be to tackle where in Kentucky she might have been born. That introduces the question of how she arrived, from Kentucky, in Missouri. Since her husband, William Stinebaugh, was, according to census records, born in Missouri, the most likely scenario would be that he met his future bride in Missouri, rather than back in Kentucky. Could there be any neighboring Kinslow families in Dallas County, Missouri, around the time of their marriage? Perhaps there would be a way around that burned courthouse, after all.

As luck would have it—and though a surname like Kinslow would itself be ripe for spelling creativity—just scrolling through the contiguous pages in the census records, I could find no sign of any Kinslows residing in the neighboring properties near the Stinebaugh residence, either in 1860 or 1850.

Well, it was worth a try. I always like to take a peek and see who else is living nearby my target ancestors. If I don't look, I don't know.

Next step was to search more generically for Kinslows in Missouri, as jumping straight back to Kentucky to seek Kinslows would, at this point, be too premature.

As it turns out, there was a Kinslow household in Missouri—not, unfortunately, for either 1860 or even 1850, but in the 1870 census. Then, too, another complication was that the entry was not for anyone living in the county where the Stinebaughs had resided—Dallas County—but in nearby Polk County. It was an entry for a man named Page Kinslow. Aged thirty one at the time, that would put his year of birth at either 1838 or 1839. If—and, of course, that would be a very tenuous if—he were a relation of Sarah Stinebaugh's, that might even put him at the level of a brother or cousin.

What if I followed the trail backwards in time, from this Page Kinslow, to see if he had any relatives named Sarah? Almost too good to be true, it turned out that this Page Kinslow had an entry on Find A Grave, with volunteer-added contributions about his personal history. While I realize that such volunteer entries could very well be merely mistakes propagated by the passing along of unsubstantiated material, I was game to trace Page back to his roots in the county revealed by this Find A Grave entry.

The entry asserted that Page Kinslow was born in 1838 to parents Joseph Kinslow and Agnes Payne. His childhood home was listed as Barren County, Kentucky.

Off to the Internet resources for Barren County I went! Unlike what I had discovered for the disabused Dallas County in Missouri, Barren County had apparently fared much better during the turmoil of the Civil War years, as witnessed by the online opportunities now opening up to me in my newfound Kinslow details.

If Page was going to turn out to be Sarah's brother, I was in for some easy going through online resources in this county. 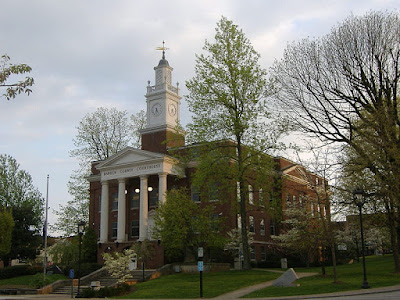 Above: The Barren County, Kentucky, courthouse, located in Glasgow; photograph courtesy of the Wikipedia contributor, Bedford; in the public domain.
© Copyright 2011 – 2022 by Jacqi Stevens at 2:55:00 AM
Email ThisBlogThis!Share to TwitterShare to FacebookShare to Pinterest
Labels: Kinslow, Stinebaugh