It seems as if Americans are fixated on times and dates—well, at least in comparison with people we run up against from other times and other places. As we trudge backwards in time in this exploration of our family history, reading reports from generations long gone, I get a feeling that births, deaths and other significant life passages weren’t so carefully paired with their dates of occurrence in those past eras.

When it came to examining life’s timelines for my husband’s Irish ancestors, it seemed the age pinned to any specific individual reflected more a sense of the person’s stature than lifespan. The young seemed to stay young for as long as possible. But, similar to the shifting faces of the girl in the nursery rhyme, when they were old, they were very, very old.

I always assumed this genealogist’s predicament—that of properly documenting each ancestor and pinning them accurately within the scope of history—was owing to the possibility that, at least among our Irish ancestry, no one was paying much attention to dates on the day each child was born.

Dates of baptism, however, were a different matter. And thus, much as we found many of our American forebears doing as they sought delayed verification of their birth at the advent of the Social Security program, I was fortunate that at least two members of our Tully family sent for a baptismal record confirming the approximate date of their birth—and subsequently saved the verification until the day they died.

One of those Tully descendants, as I’ve already mentioned, was my husband’s great grandfather, John. That document, however, I didn’t find until well after I had found out about another one: the baptismal record for Johanna Tully Ryan.

According to a note sent to family by a Father Maher back in 1892—long after Johanna’s birth—her baptism had been recorded as occurring on May 28, 1832. Given the circumstances surrounding births in that time period and location in Ireland, a Catholic priest was likely to be on hand, at the family home, to baptize the child as soon after birth as was practical. With infant mortality issues, that likely meant a baptism on the day of, or the day after, birth. Not yet baptized into the faith compounded the tragedy of a life that might be lost so soon.

Having a note like that, for those descended from Ballina’s parish in County Tipperary, is irreplaceable. We’ll find out for sure, once the Catholic parish records are released in digitized form by the National Library of Ireland later this summer, but from what I saw last year as I cranked through the microfilm of those records in Dublin, what little could actually be read did not seem to include every baptismal record for this particular parish.

Nor have I found official documentation of the other key events in Johanna’s life. Thanks to an email exchanged with a distant Tully cousin six years ago—on Saint Patrick’s day, incidentally—I do have a date for Johanna's marriage and for her death. But these are dates for which I cannot locate corroborating records.

I’m thankful for the Ryan family’s own documentation, though. Otherwise, I would not be able to trace Johanna’s journey through life—nor discover her many descendants in the subsequent hundred-plus years since she died.

According to her direct descendant, Johanna Tully was married on July 4, 1853, in Brantford, Ontario—close to her family’s new home in Paris, Brant County. Her groom was Edward Ryan, a fellow Irish immigrant born in 1829. Though this cousin even provided the name of the Catholic priest—Father Snider—I have yet to find either church or governmental record of this event.

While I also am stymied by the date—and location—of Johanna’s death, that, of course, is not the next significant point on her life’s timeline. Apparently, after the arrival of their four children, Edward and Johanna Ryan and family set up housekeeping far, far away from their Ontario home. According to this cousin’s notes, the next date of interest was July 10, 1882, when Edward Ryan received his certificate of United States citizenship in the Territory of Dakota.

Just as I had struggled with documentation of the other events in Johanna’s life, despite having an exact date, I had not been able to locate any confirmation of that achievement—until this past weekend.

Surfacing so far from their previous home in Ontario, Canada, these yet-again-immigrant Ryans took me by surprise. If it were not for the guidance provided by this distant cousin, sharing notes on his own immediate family line, I likely would not have ever guessed the path this family had taken—which makes me even more grateful for the distant cousins out there who are willing to help us on our own research paths. 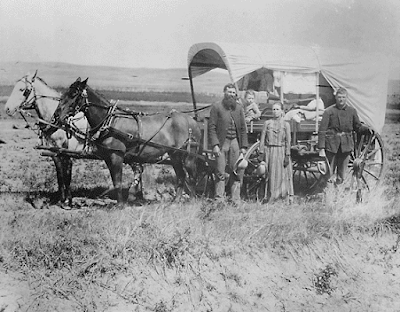 Above: Photograph, circa 1866, of unnamed homesteading family in covered wagon in region near Loup River, Nebraska; courtesy Wikipedia; in the public domain.
© Copyright 2011 – 2022 by Jacqi Stevens at 2:50:00 AM
Email ThisBlogThis!Share to TwitterShare to FacebookShare to Pinterest
Labels: Documentation, Immigration, Ireland, Ontario Canada, Ryan, Tully