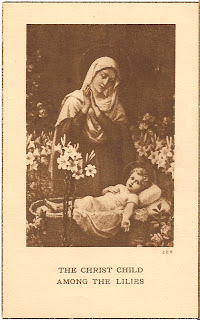 Now that I’ve introduced you to each of the sons of AgnesTully Stevens and her husband, William Stevens, there is one more person to mention: their lone daughter in the mix of these rambunctious boys, Mary Agnes Patricia. As the only daughter, Pat was the one Agnes looked to when it came time to pass on all the papers she had so carefully preserved of the family history.
In a way, I should be grateful for that. If it weren’t for Pat, perhaps I’d never have received the many letters, photos, record books and other memorabilia of the Chicago years of the Stevens and Tully families. Yet, I never met Aunt Pat and don’t even know what she looked like. Becoming the keeper of the records, she kept herself behind the lens of the camera, beyond the scope of many of the gathered papers. While I owe her so much, and while that debt drives me to wish to honor her memory, I have little to tell about her own life.
I do know that she was born in January, 1917, in Chicago, for online resources already include digital images of that decade’s records—incredibly, as I’ve found some of those online documents which belong to those yet living, pushing the envelope on respect for individual privacy. And of course I also know about her passing just before Thanksgiving in 2005. It’s what happened in that small dash between those two dates that I know the least.
I expect the only sister to five brothers would live a life somewhat out of the ordinary. In  a letter to their mom in 1966, her oldest brother complains, “I hope Pat gets back inside at work where she belongs. Is she some kind of a nut?” No telling what this sister was up to that elicited a comment like that.

And this was the daughter that prompted Agnes’s mother-in-law to advise, “I also hope that Pat has come to the age where she makes up her mind to save a certain sum every month, so she will have a bank account. What would she do if she were sick or injured and had to go to a hospital.”
Whether she could just be considered active, or ahead of her time, I don’t know. I do know that she was an independent woman who did not marry until she was thirty-two. Her obituary mentions ten years’ work for Braniff and Delta Airlines, but I’m sure she had more activities to her credit than that mere decade.
And yet, some mementos from childhood offer the glint of hopes for an inspired life. She was evidently named after a nun, Sister Mary Patricia. A handwritten note on the back of a card labeled “The Christ Child Among the Lilies” reminded her of that spiritual heritage: 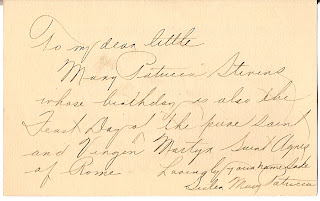 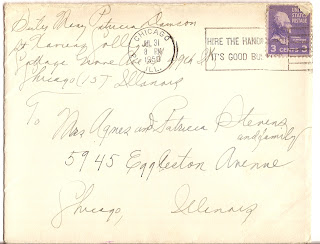 An invitation in 1950 for the Golden Anniversary of the Religious Profession of Sister Mary Patricia Dawson, R.S.M., of the Sisters of Mercy, among Pat’s papers gave a clue as to who her namesake actually was. The invitation was addressed from “St. Xavier’s College,” the first Mercy college in the world and one of Chicago’s earliest institutions of higher education.
Sister Mary Patricia’s invitation coupled with that first note to her little namesake so many years before demonstrates a longstanding relationship between Pat’s mother and a woman devoted to their mutually-held ideals of education and religion. Perhaps Pat’s brother Ed’s desire to give his financial support to another Catholic university—Lewis—was an outgrowth of their mother’s example and relationship with Sister Mary Patricia. 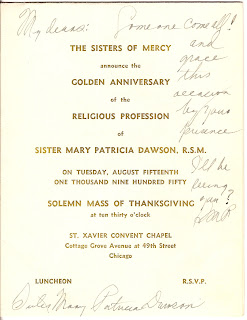 Whatever that relationship might have been, it evidently included some link to a place called Mercy High School. Found in Pat’s papers was a tiny gold-sheathed item labeled inside, “Senior Annual ~ at the School ~ January 19th 1934.”
On the facing page was handwritten:
Francis Fish + Pat Stevens
Went to Siegalls after dance and reserved table for 16.
John – Andy
Bud – Scotty
Marge – Crowely
Marie – Gibson
Helen – Bosch
J. Sherlock
Fran + I came home at 4 bells
Had grand time 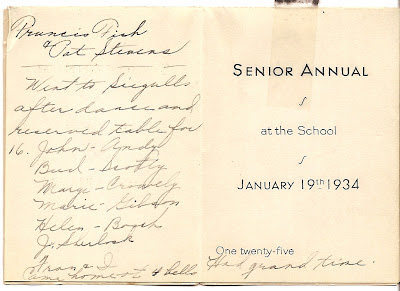