In order to explain the letter from Theresa Blaising Stevens that I found in her daughter-in-law’s personal papers all these years later, it is necessary to first explain a few things about Theresa, herself. And that requires an explanation about her husband—and the reason Theresa came to be part of this Stevens family.

Theresa, herself, was an immigrant. She was born in the territory between France and Germany known as Alsace-Lorraine, a region much-disputed in wars and political maneuverings over the centuries. Her birth in 1866, for instance, preceded the eruption of the Franco-Prussian War, which perhaps explains her family’s prescient exodus to the New World. 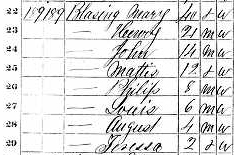 Because of that political turmoil, using United States census records to provide Theresa’s background information seems futile. The 1900 census said that the family, of German heritage and speaking German, arrived here in 1867. By 1910, the census informant decided the arrival date was actually 1866—which would put Theresa traveling as an infant. By 1920, the family’s heritage and mother tongue was listed as French—although I suspect that was merely a function of the political claims of the times and a routine bureaucratic extension of the one entry to the other in listing the language.
Whatever the arrival date, by 1870, the family—at least Theresa’s mother and six siblings—were listed in the census in New Haven, a town not far from Fort Wayne in Allen County, Indiana, which just happened to have a sizable French settlement on its east side. As of 1880, the United States census showed Theresa as a fourteen year old girl in the household of her brother John. By the time she was twenty one, Theresa had accepted the proposal of a Fort Wayne gentleman, and the two were married on June 14, 1887.
Though their marriage lasted a solid forty two years, it did not start as a story book wedding where the last page reads, “and they lived happily ever after.” To understand why, you have to know that Theresa’s husband came with a history of his own. With all that detail to add to the mix, I’ll have to save the explanation about John Kelly Stevens for tomorrow’s post.